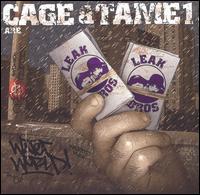 (Cage and Tame 1 are) Leak Bros

“For those who ain’t hip, that’s a dipped cigarette.”

Cage Kennylz, horror-core NYC mainstay and Def Jux signee, forms über-duo “Leak Bros” with fan-favourite Tame 1 (of the much-beloved Artifacts) and fulfills his Eastern Conference contractual requirements. Loosely based on the idea of a theme park where patrons smoke PCP and where staff ingeniously quip “sorry son, you have to be this high to get on this ride," you pretty much know what to expect from Waterworld before the intro fades.

This record has been dubbed a “concept album,” but to be fair to genuine stabs at the genre (like Organized Konfusion’s Equinox or Capital D’s unheralded Writer’s Block), calling Waterworld a concept album is like calling anything by Cypress Hill a concept album. What we have here is not an album centred around a coherent, cogent storyline with a directed focus or message to convey. The “concept” here is to take two of New York’s emcees-du-jour and have them spit about something they’re quite familiar with over twelve tracks, a mandatory intro, and a mandatory outro. To their credit, Cage and Tame do take on the central topic of drugs from a variety of perspectives, but they forgot to lick it before they rolled it, and any semblance of “concept” quickly crumbles for lack of a true cohesive agent.

But we won’t hold that against them, for there’s enough fault to find regardless of artistic intent. “Got Wet,” fortunately, is not one of those faults. Up-and-comer Camu Tao’s ominous descending guitar line makes nice with hi-hatless drums chopped and overdubbed with a drumroll to create a boom-bap feel approximating the percussion of your favourite Street Fighter II combo. The hits are a clumsy hash, but they work well to update Sex and Violence era BDP for a more easily-impressed generation. The track sets the tone as the chorus repeats: “And we can see death through a dipped cigarette”. The track continues with such repetition of drug vocabulary. Cage lets you know how easy it is to get “Leak": “You ain’t got to lie to do it/ Just get a little lighter fluid.” Tame paints the addict: “Savages’ll smell it through two layers of cabbage.” Wait now, is it me or are we getting a little tiny bit political here; is this tightly-fitted rhyme scheme masquerading as social commentary?

“See Thru” sees Mondee climb the adjective ladder from “unknown” to “underrated." Yak Ballz’ usual backer exhumes Roger Troutman but doesn’t bother to hose him down, and lets him stink up the studio while oozing out the beat’s leading synth loop. Cage is overshadowed by Tame’s enthusiasm. We recall the Artifacts in their heyday as we hear a near-perfectly delivered verse about a visit to an old flame in the PCP ward: “Went to see her after 40 days/ Ass got little…says the voices in her head make threats that sound evil/ “Kill people”/ She don’t know how to act/ Like Vin Diesel.” That last line is delivered with an ideal natural hesitance typical of the class of ’94; the punchline sounds new every spin despite being telegraphed bars in advance.

Moreover, he’s so right. Tame is disaffected by his girl behind the glass and observes more than empathizes, giving us a little pessimistic glimpse of the type of uncaring camaraderie that surrounds drugs and drug addicts. Either that or he ripped out a diary entry and rapped it in one take with a joint in hand. Benefit of the doubt doesn’t come easy when half of your debut album treats “Boom," your crew is “Boom Skwad” and your debut video was filmed in a fog of smoke. Nevertheless, “See Thru” is the record’s top cut, and deserves to make your hip hop mixtape this month.

The next two tracks are disappointments. J-Zone continues his reign on top of the beatmaker trash heap with “G.O.D."; this dude will pitch hi-hats and harmonize them with bassline hits. It shouldn’t work—it should be repulsive and laughable—but scrap-yard Salvation Army beatsmith Zone wrangles the mess into cluttered class. Cage and Tame belch down Zone’s house of cards with banal battle rhymes. The listener is supposed to hear the characters of a pair of deviants high on PCP, but Cage and Tame just end up sounding like themselves, which is why this became the album’s first single as it was easily given a life outside the supposed overarching “concept." Tracks like this help us answer the ambitious “did they mean it that way?” question with “probably not."

RJD2 proves he’s the best drum-programmer on the record with “Gimmesumdeath’s" cymbals, but he pulls a Camu with a lackluster strings-n-things arrangement that waffles between Yanni and the Doors. Stick some lazers over it and call it a beat, sure, but that doesn’t mean you didn’t take this out of the C-grade reject pile from Deadringer (2002). Cage and Tame trade verses on why going out on Leak is better than dying in an old age home or a hospital bed (did they base this on the Barbarian Invasions?), but just assume everyone’s life is miserable enough to need drugs to be even spottily contented. Listen too closely and you may hear echoes of “Euthanasia” commentary as Cage makes a case for drugs as escapism in a world where reality is too harsh to handle. He ends the hook with a plea for someone to kill him the day he no longer bleeds hip hop. A tear comes to my eye.

The only redeeming song left on Waterworld is the Mighty-Mi produced “Dead.” Cage owns this song, and recalls his “Agent Orange” days from Fondle ‘Em. A two-stepping Igor plays keys while sampled sobs and cries are found in the background. I’m pretty sure that this is the first track I’ve heard from the perspective of a corpse mid-embalming. This is the episode of Six Feet Under where David has to stuff a dead rap star, and the song maintains a complimentary eerie, morgue-cool feel: “My pores start to hyperventilate/ Hypes up my mental state/ Go psycho-delic out of my mental state and celebrate." Cage’s post-mortum enthusiasm is based on the reasoning that he’d “rather be dead than a guy who raps about how great he is"; if goth kids wore Yankees hats, this would be their back-to-school mixtape mantlepiece. This track is no great revelation, but it is steeped in the entertaining gore that Cage’s voice thrives on. Let’s hope El-P takes note.

“Druggie Fresh” sees Tame reinventing the already overreinvented "La Di Da Di" accompanied by a simple but effective bells-and-break combo. The sing-song cadence is novel, but there’s no replay value as Tame loses himself in attempting to keep up with MC Ricky D. To bite some Group Home logic: “Delerium” was so ignorable that I ignored it. The same can be said for “Leakie Leak,” “Stargate” and “Submerged."

El-P has been quoted as saying “this album deserves a 4.5 or 5 rating," but I doubt he meant out of 10. I can’t help but think that both emcees’ best moments come when they step out of the album’s purported conceptual confines and into their more natural personas. Nowhere am I saying they had to “force” a drug record, mind you, but with Tame impressing on the nigh-personal tale of “See Thru” and Cage being grossly engrossing on “Dead,” you have to wonder if the two would have better spent their time dropping individual releases and highlighting their respective strengths. While Leak Bros does offer a handful of impassioned vocal performances, it suffers the fate of so many other NYC-core records: it’s bogged down by boring, formulaic production and ditto rhymes. When it hits, however, it hits hard; there’s a strong EP in here somewhere. And if you look really, really hard, you might even invent your own social commentary.