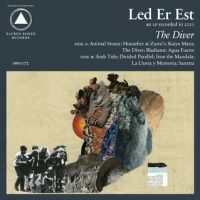 I have to admit, it was pretty obvious after taking in only a sampling of Led Er Est’s new LP, The Diver, that we shared a pleasantly corrupting love for do-it-yourself soundtracker/cheese-horror maestro John Carpenter. Carpenter’s like a weird vortex of everything over the top about the digital music revolution in his early ‘80s era, his arrangements an endearingly slimy synthesis of pseudo-headbang shred, playfully moody synthesizer, and endless cinematic melodrama , so it really only seems obvious to me why anyone even attempting to touch on a relative pastiche would do well to digest his work. The Diver, released by Brooklyn’s diabolically consistent Sacred Bones Records, reminds me a lot of Carpenter’s work in other ways, too. Here, something that could easily have come off as a simple collection of mutated signifiers escapes the dead weight of imitation by consistently inviting a playful personal imagery to leaven the rigidity of composition and style, and comes through the processor feeling like a revivified celebration of everything fun about dark electronic music.

As such, it’s hard for me to avoid thinking of The Diver in cinematic terms. The songs tease, weaving in and out of stylistic reference points just enough to make them familiar, but always running on and on in churning hypnosis toward some more deeply distant image of a mysteriously personal nature. It’s a grand balance of pop form and experimentalism, and lord knows there are plenty out there doing it without half of Led Er Est’s talent for controlled transformation. But they squeeze so much of their own whimsy into the tracks they can’t help but burst out of those basic modes and spill into the atmosphere to ride secret frequencies all their own. It’s a friendly balance, like Carpenter’s, that makes the dark corners evoked by the tunes not adversarial, forbidding spaces, but exciting spots to adventure into.

“Animal Smear” is a breathless footchase through catacombs by flashlight, its slithering drum machine trailing always just behind the fevered gasps that bounce from every angle of a claustrophobic maze. The melody suddenly rises out of the murk, and you turn a corner and see a ladder before the mirage vanishes as quickly as it appeared. It might be the most viscerally engaging retroactive soundtrack to King’s Quest I’ve ever publicly endorsed, and that’s saying something. The haunted house menace of instrumentals like “House Fire at Zumi’s” are no less for lacking vocals, and as a number of other tracks show, that element of Led Er Est’s sound is as malleable as anything else writhing around in their galvanized clamps. Voice becomes a foghorn over the shimmery chop of “The Diver,” which literally bubbles, oozing beneath the seeking beams of synthesizer above. Here the thinness of the vocals becomes a lifeline to the shore, calling out with a breathy Peter-Murphy-in-the-mist refrain that effectively dramatizes and animates that ominous churn. In that fashion, vocals seem to serve The Diver much better the more they’re respected as atmospheric elements in addition to interesting texts, and the band make good on that necessary compromise throughout.

It may have come more easily on the group’s less blissfully ramshackle debut, Dust on Common (2009), but that record’s relative stylistic cleanliness was easily counteracted by a thick sheet of lo-fi lead. Here, it takes a little more work for the clearer mix to not make heavily processed vocals in particular sound too imitative or forced (my only real qualm in this regard is that “Kaiyo Maru” never quite reaches escape velocity), but in general The Diver wins out at getting mussed up without looking at all careless. The band casually let their clean-cut tendencies fall away instead of tediously nitpicking a sculpted anti-image, and fill every corner of their songs with curious décor as they expand them into a Lewis Carroll house of many differently sized rooms, coming off sounding like a volatile, pressurized gas slowly released into a hall of mirrors. With a little room to breathe, the melting baroque strings and cooing harmonies of “Iron the Mandala” are downright romantic. As the moods shift and vary in their newfound freedom, I realize that it’s Led Er Est who are well enough in control to be doing the chasing in those dark corridors. Almost in recognition of their mastery of that murky maze, the band come to a slow halt at the beaming, sunlit entrance-made-exitway of “Sanetta,” and all is forgiven.

Maybe it’s just some residual adulation for the subtle hip-hop fills that bounce beneath standout “Divided Parallel,” but The Diver feels as much like an image of the associative obsessions of this moment as it does the techniques and imagery of a previous one. With tunes this needle sharp, it’s a good thing Led Er Est have got the equilibrium of acrobats. John Carpenter may have beat them to it at the end of Big Trouble in Little China, but in 2012, it’s Led Er Est soundtracking their own big-rig cruise into the sunset.