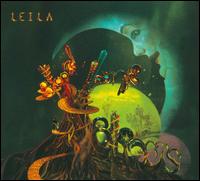 The experimental music movement Fluxus produced a number of pieces designed to use traditional instruments in non-traditional and unintended ways. A piano used as a mantle for a vase of flowers was just as legitimately musical as its employment for virtuosic ivory tinkling. Flash forward a few decades and you have early techno and house producers who bragged about having thrown out the manuals upon buying a new piece of equipment. The goal here was similar: to extract something new and unique from an instrument by purposefully ignoring how it was “supposed” to be used.

Enter Leila Arab, a keyboardist from London by way of Iran. In the mid ’90s, Björk adopted her as a part of her touring band, assigning her the role of keyboards and live mixing; the latter being something that Leila had relatively little experience with. We’re talking about Björk, so rather than trying to crash Leila into the traditional mixing knowledge, the Icelandic queen of whimsy was happy to assign Leila the role of a “terrorist,” and let her perform sometimes-radical transformations on the music. Learning from such an iconoclast, it was inevitable that Leila’s solo forays into electronic music would be something special, and, one solo album on Richard D. James’ Rephlex imprint later, this came to fruition.

And then, nothing for nearly ten years. It’s fitting, for an artist as unique and uncompromising as Leila, that comeback would be so sudden and strong. Blood, Looms and Blooms picks up where 1998’s Like Weather and 2000’s Courtesy of Choice left off, with a stylistic pastiche that manages to sound like nothing else on the market. Some things have changed—namely, both of Leila’s parents have passed away, the result of which can be read in the liner notes specifically thanking her “blood,” and heard in the fragility of “Daisies, Cats and Spacemen,” featuring her sister Roya. Over Portishead-esque backing of melancholy strings and distant drum samples, the Arab sisters are confronting a dark and unsettling world, yet they have musical collaboration to bind them. The antique music boxes and backwards orchestrations on “Daisies” evoke damaged old-timey radio, while Roya’s vibrato-laden, jazzy inflections fit in perfectly with such an ancient and pristine soundscape.

The collaborators—mostly singers—on Blood are well-placed. Martina Topley-Bird’s smokey whisper floats well over the noisy guitars and overdriven drums and bass on “Deflect,” the closest thing to a “rock song” here, which is periodically taken over by washes reverb and feedback. Like the best moments on Blood, “Deflect” is evidence of Leila’s non-traditional roots, as stiff drum machines are thrown against wolf wails and horribly fuzzy bass. If most music producers accept their roles as master chefs, Leila prefers to go crazy with the ingredients, resulting in a shock to the musical palette. Blood is also full of unexpected curves; “Deflect” is followed by a meditative cover of the Beatles’ “Norwegian Wood,” featuring Luca Santucci on fragile, frighteningly intimate and gradually distorted singing, while Leila delights in taking a warm pad bass and kitchen sink percussion in and out of rhythmic phase. It’s a jarringly fresh look at an old favorite, and manages to be unique without sounding experimental for the hell of it.

Blood can be a dark affair, but it positively shines with optimism and childlike whimsy on “Little Acorns.” A horn-based exercise, featuring Khemani and Thaon Richardson as play-singing children, “Acorns” is a surreal take on kids’ double-dutch on a hot summer day. Keeping “Acorns” in mind, one can begin to see Leila as a kind of Roald Dahl: this music is dark, but in a way that invites exploration and titillation, rather than scaring the listener away. The Plaid-esque caverns on “Carplos” coax the listener to bathe in Leila’s shimmering symphonic pads, while opener “Mollie” rains down tears of Technicolor frequencies, and “Mettle” relies on actual dripping water for its percussive foundation. Specials frontman Terry Hall takes vocal duties on the mysterious nursery rhyme that is “Time To Blow,” ethereal quivers of voice over a singsong repetition of bass vibes.

All that said, you know what? You could have skipped this review and just looked at that cover art. It’s magnificent, it’s magical, and, much like Leila and her music, it stabs at you just that much more because there isn’t anything else out there that’s quite comparable. It’s rather difficult to describe the feelings and aural excitements wrought by Blood, Looms and Blooms, but suffice to say it’s the work of a powerfully brilliant and individual artist. Now go get terrorized.