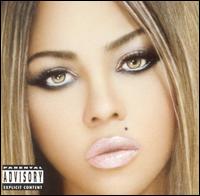 It’s kinda irritating. The beat mercilessly pummels the listener, misappropriating the legend of Mr. Smalls in a manner more reprehensible than that fucking Eminem “Running to Die” or “Living to Run” or “Running to Cry” or what-fucking-ever song that was. While this track is probably the most ruthless offender, the entire album reeks of formaldehyde, with B.I.G.’s most memorable couplets getting repeated verbatim, sounding like a group of stoned Dave Matthews fans trying to rap to a cut they don’t really know that well.

Kim’s getting a lot of credit for her raps on this album, at times deservedly. “Spell Check” is an impressive exercise in one of hip hop’s most well-worn gimmicks, launching the album on a high note with a volley of insults at almost everyone, spitting, “In D.C. I ball like I’m WNBA’s M.V.P. / On ESPN or NBC / I like it raw like my boy the late ODB.” She seems on a mission to start beef with everyone, and many of her punchlines can draw a snort or two, like when on the otherwise appalling “Shut Up, Bitch” she sneers, ”Star Jones don't like me / She cheap and I like the best / Damn, it must feel good to pay less.” But despite this, the song shows an inherent lack of creativity even beyond the repeated high school-chorus of “Shut Up, Bitch” (even having a comma in the song’s title seems a little too cordial), since there are about seventy eight better ways to make fun of Star Jones.

On the bulk of Naked Truth, K.I.M. does her best impression of other MCs. This is a frustrating but characteristic move. Her entire career has been haunted by her relationship with Christopher Wallace: her first album seemed slightly too indebted to his style for some to believe, and she only worsened the situation by calling her loathsome follow-up The Notorious K.I.M.. She’s obviously not ready to give up the Biggie-baiting on The Naked Truth — great fucking heaven is “All Good” obnoxious — but, to her credit, at least she’s ripping off some other MCs in the process as well. “Quiet,” for example, is a perfect emulation of a bottom rung G-Unit project, including a menacingly over-produced beat, Em’s “emphasis on every syllable” delivery, maudlin strings, and, uh, The Game. It’s like she needed a (small, desperate for allegiance) audience to watch her Biggie-doing-Fifty-doing-Eminem impersonation. “Lighters Up” finds her trying her hand at some Sean Paul dutty rockin’ dancehall shit, and the woeful “Whoa” features a chorus indebted wholly to Fiddy’s marble-mouthed slur. Except with Kim it ain’t marbles (see “Gimme That”).

She also borrows Fiddy’s unfathomable braggadocio, claiming, “Brooklyn bitch, it go wrong, I get right / Back with a classic, now give me six mics.” It’s too bad that The Source actually did grant her “five mic status,” a comment on both the sorry state of the mainstream and the abject inadequacy of that soiled rag of a publication. Kim recorded the album shortly before heading off for a year in the slammer; perhaps the album’s allure is elevated by the back-against-the-wall mystique. But I mean, fuck, just get The B. Coming instead — that album remains the soulful high water mark of '05s above-ground output. It only takes one look at that vacant, doe-eyed cover, one listen to the heart-stoppingly awful “Shut Up, Bitch,” one sitdown with this 76 minute monstrosity to get the picture. This album is as fake as Kim’s physique, as vapid as the fashion she flaunts, as undeservedly praised as her entire career. Save yourself from it.