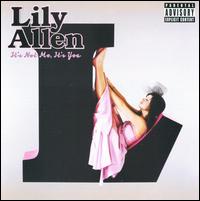 Lily Allen: It's Not Me It's You 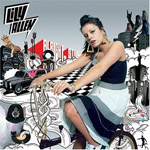 There's no way around it: I'm infatuated with Lily Allen. Maybe it's the sassy attitude, or the cute-as-shit British accent, or the cute-as-shit everything else. (Here the voice of Feminism interrupts and shouts, "But what about her musical talent? What about a respect?") Call me a typical guy or a male chauvinist pig if you must, but despite its potentially-belittling, reductive connotations, attraction is just as valid and honest a response as any. Pop music is often undeniably about sex, and to ignore that would be foolish. Like it or not, there's a big market in what Mary Lou Lord once called "his indie world" for female musicians who are smart, talented and, for lack of a better word, hot. This is not to say Cat Power and Jenny Lewis (for example) didn't release good records this year - they did, and their being easy on the ears as well as the eyes enhances the appeal, you can't get around it.

The music aficionado is always in a perpetual, constantly rotating love affair, but actually crushing on a singer? That's still time-honored teenybopper territory. We're in a rough position, us sensitive indie fellas: can't stomach the glossy sexuality of Britney Spears, but can't talk about how much we like Chan Marshall without feeling a twinge of post-mainstream (or latent-chauvinist) guilt no matter how seriously we're discussing her artistic integrity or whatever. On the level of self-respect, too, as a serious listener I want to be listening to music for quality, not how hard it pushes my hormonal buttons. That said, I have a major thing for Allen and there's not much I can do about it: She's funky, confident and fun, and that's just on the first song.

The fact is, Alright, Still is pretty great from any perspective. Her lyrics are streetwise and smart, framing a character out on the town who don't take no crap from nobody, but especially boys, despite an occasional vulnerable moment. Unlike everything that seems forced and fake in the recent American pop scene, from Christina Aguilera's overworked melisma and self-parodizing ("Still Dirtty?") to Nelly Furtado's sexified R&B jams, Allen comes off as a real person singing about her own life and her own relationships. When she talks about sex, she does so without turning on an overbearing red light: "We do what we do, screw who we screw," she announces matter-of-factly on "Everything's Just Wonderful," and then moves on to the pre-chorus.

Allen's voice, lilting and sweet and altogether contrasting with the pissed-off, cleverly critical lyrics (see "All the magazines that talk about weight loss / if I buy those jeans, I can look like Kate Moss"), bounces even higher than the music's grooving rhythms, with a lithe British accent that makes her delivery seem effortless. "Smile" sees her sliding through a trio of melodic triplets in the chorus, a parallel of the verses' three-pronged rhyme scheme. She can do it all: sad, sympathetic, affectionate, sarcastic, excited.I should mention at some point that I have a girlfriend, but as she's across the pond too, we'll keep going.

Musically, Alright, Still is a bit of a mish-mash of styles. She may be a pop singer, but Allen leans heavily on syncopated rhythms to provide the easy funk of "Smile" and "Not Big," while "Friend Of Mine" is expressly reggae. "Shame For You" is all heavy Fiona Apple piano and surly "don't take me on" lyrical jibes, while "Littlest Things" apes Revolver-era Beatles. It's on "Littlest Things" where Allen gets confessional, reminiscing over everyday scenes from the beginning of a failing relationship: "We'd spend the whole weekend lying in our own dirt / I was just so happy in your boxers and your t-shirt." The simple images, like when "you saw that I was nervous so you held my hand," are more touching than any hyperbolic statement of longing could have been, and this sense of being grounded in everyday reality gives the album a focus and a heart.

"Take What You Take," cribbed right from the Natalie Imbruglia guitar-pop playbook, is the only song that ever really feels derivative, and as a whole Alright, Still is refreshingly original. The only way the record would be better if the Gold Glove-catchy demo "Nan, You're A Window Shopper" had made the cut over "Alfie," a droll-cutesy song about her little brother.

If I'm attracted to some combination of Allen, her music, or the gorgeous in-between fantasy animal that lives in my head when I listen to the record, I think it's safe to say that I won't be alone. Between Allen and The Pipettes, every self-respecting dude in America is going to spend this summer listening to a bunch of British girls sing kiss-off songs about other dudes, trapped in a vicious cycle of sexual longing and awkward sensitive-guy guilt. As for me, I'll be listening to "Littlest Things" and waiting for my girlfriend to get back from the other side of the Atlantic. She's a heckuva singer, too.