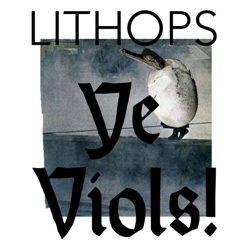 Call it that sense of impoverishment that makes Lithops’ temporary and rare rhythmic slurry a feast of water drank in a desert. Call it true dissonance with noise, an understanding that the truest appreciation of disintegration comes after a full and patient viewing of the whole. Call it better than Matmos. All of this would be true because, for Jan St. Werner, who moonlights in electronica mainstays Mouse on Mars, Lithops is established enough to be considered a consistent outlet, uninterested in the one-time destruction of some norm no one was paying attention to anyway. Noisy, counterintuitive electronica tends towards meta-statements about subversion of expectations. Eight albums into Lithops’ discography, the apologists’ creed of the meta is nowhere to be seen. Werner loves this music, that much is evident.

Ye Viols! is equal parts boppity noise and blippity melodies, the kind popularized and not fully fleshed-out by Crystal Castles, Matmos, and other dabblers in anachronistic keyboard tones and borrowed nostalgia for Mega Man-inspired thematics. It’s all a bit of a dog’s breakfast, though Werner’s charming assembly oscillates between disarming (“Sequenz,” with its suggestion of song-structure), antisocial (“Apps 1,” with its preempted motion and randomness), and downright, dickheadishly antagonistic (“In Nitro,” with its high-pitched squeal, and occasionally “Bacchus,” with more of the same). The album bubbles like liquefied metal, toxic, lava-toothed, but fluid and fascinating to see unroll.

Which all gives the record real character of the demanding kind, requiring the sort of patience one employs when dealing with people rather than faceless pap designed not to inconvenience us or make us feel anything other than comfort or wistfulness. “Wammo,” for instance, reveals itself after two minute of noise, crunch, and other red herrings. Having said all that, Ye Viols! is still a meager offering, and Werner does little to address the most common criticism of his work in that it still amounts to a sort of schizophrenic selection of binary categories. It would be interesting to hear one song build to another rather than clumsily hand the ball off, which would neither require a compromise of an individual song’s content nor of its difference from the next, but simply a greater attention paid to sequencing.

The album finishes as suddenly as it starts, as if half-complete, and one’s left with the feeling that Werner’s pastiche comes across as effortless. Yeah, there’s some appeal in that. But some sweat, some struggle, might disclose the flipside of effortlessness, which is the tactical reveal. Lithops is due a real treatment that brings to bear the full scope of Werner’s talents.