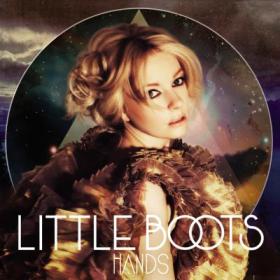 New in town? Little Boots has your back. The streets aren’t safe around here and you can’t trust just anyone, but she’s different—she doesn’t hang with the crowd (though which crowd she’s talking about isn’t particularly clear), she’s poor, she wears crappy clothes, and she’ll show you a damn good time. If you end up not having a damn good time, too bad, it was your choice to follow her around anyway. So begins Hands, the debut album from British wannabe pop princess Victoria Hesketh. “Imagine if Debbie Harry had come from Blackpool and played the synthesizer,” gushed a TV producer deemed a tastemaker by the BBC as its panel named Little Boots the artist most likely to hit it big in 2009.

Never mind that “New in Town” employs the kind of PR-savvy first-person declaration that you can’t take seriously because it was obviously written by someone else (one of the guys from Geggy Tah—yes, Geggy Tah), there are a couple problems with the media-friendly narrative of local girl unexpectedly made good. First, she’s not a new artist; Hesketh played for three years with Dead Disco, a moderately successful new wave group that lives on in the occasional neo-disco remix. Second, Hands doesn’t sound, by any means, like the product of one woman and her electronic piano. Of course it isn’t: after dumping Dead Disco, Little Boots shipped off to L.A. and enlisted the help of no fewer than nine producers in crafting her album’s twelve songs. Accordingly, the results are lushly arranged and diverse to a fault. The musical influences drip from almost every track: New Order, “Like a Virgin”-era Madonna, Confessions on a Dance Floor (2005)-era Madonna, Annie, Hot Chip (which figures, because one of her producers is Joe Goddard), Kylie Minogue (which figures again, because one of her producers is Biff Stannard), the Knife, Simian Mobile Disco, and the Pet Shop Boys, among others. There is a ton of cool stuff going on here, especially if you, patient listener, enjoy peeling apart the onion and figuring out who was directly and indirectly responsible for each bass line and synth hook.

The more pressing problem with the “New in Town” storyline is that Hands isn’t a particularly good time. Lyrics tend toward lamentations about unrequited love for a ubiquitous “you” who starts to sound less like a person than like some amorphous, anthropomorphic bull’s eye for all of Hesketh’s wandering, projected feelings/whims, both the source of and solution to all Little Boots’s problems. In “Ghost,” she complains that he (I presume it’s a he) “walk[s] right through me” before asking him to “catch me quick before I disappear.” If we were able to attach some real-life obsession to Little Boots’s sorrow, these songs could muster some kind of emotional import, but, instead, we’re subjected to an album’s worth of stale, obnoxious languishing and weak puns. “Tune into my heart / Wherever you are / My frequency stops when we’re apart” is bad; “Don’t know my Fibonacci or Pythagoras / But the only formula I know will work for us / Is that when we’re together in the sum of our parts / It’s far greater than what we added up to at the start” is worse. Whoever came up with that line clearly never listened to 2gether.

Only two tracks fully avoid the pitfalls of overproduction and distracting lyrics. “Symmetry” enlists Philip Oakey of the Human League for a duet that recalls the unjustly ignored, guitar-driven electronics of latter-day New Order. Hearing a voice other than that of the bleating Hesketh adds some needed depth to the mix and the melody is just saccharine enough to fit Oakey’s aesthetic. The other standout, “Remedy,” might be the best pop song of 2009. The key to the track is how smoothly a sinister verse on a diminished chord gives way to an intricate, spread-out symphony of synthesizers and vocal harmonies. Its hook is a gratifyingly simple two-note alternating “oh,” and while Little Boots again addresses the omnipresent “you,” the topic is a self-directed, empowering solution to negativity and obsession—being: just dance. The obvious response is that this is pure cheese, but what is everywhere else on Hands an unaware detriment here carries a knowing wink amidst wonderful arrangements.

When I first heard Hands a few months ago during a roadtrip, it was in an alternating, twice-through rotation alongside Lady Gaga’s The Fame (2008). The immediate contrasts were not favorable for Hesketh and company: where Lady Gaga employs almost robotically precise hooks, Little Boots’s are sloppy and overwrought; while Lady Gaga has a consistent, distinctive sound, Little Boots almost always falls into the trap of forced eclecticism. Utilitarian sensibilities typically create better, catchier results, but Little Boots’s producers can’t help flaunting their knob-twiddling abilities, justifying their paychecks while counterintuitively making Hesketh’s music sound all the more amateurish. Granted, Gaga is the breakout pop star of 2009 and has way more behind-the-scenes talent and money than little old Little Boots, but “Remedy” alone demonstrates that when everything clicks, Little Boots can pull comparative Gaga-ish pop out of her glittery, oddly-shaped halter-top more readily than Gaga herself. Hesketh would probably say that she doesn’t want to be Lady Gaga and that Hands represents the kind of deep artistic statement she has always wanted to make, but I wouldn’t believe her; she’s just exploiting your touristy innocence anyway.