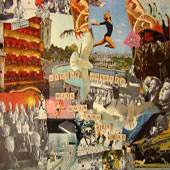 We’re fast approaching an era in which most fully-fledged, great pop songs come fully formed out of absolutely nowhere.

Or, okay, not nowhere, but usually someplace close enough. You know the story: nameless, small-town laptop-toter with a second-hand mic, an eBay account, and a pair of headphones glued around his/her ears topples the current juggernaut of pop with some infectious, bedroom-concocted wizardry. It’s like a world-scale musical game of watch-the-birdie: just when we’re all resigning ourselves to the new Radiohead being dangled over to the right, some moments-old Canadian prairie-glitchers clonk us in the collective left ear with an easily-conjured gem. Or, just when I’ve decided that despite their departure from dance-crack, Cut Copy are probably my best bet for effervescent summer jams, “Drive Yerself Crazy” by Little Jungles starts up, and suddenly the world is fizzy and light, and I am reminded that there is no replacement for crack.

Of course, I like the new Cut Copy, and Radiohead are established geniuses and all, but when the meltwater starts to pool underfoot, absolutely nothing beats an alka-seltzer pop song. And “Drive Yerself Crazy” is the song. It’s the cold-but-not-too-cold breeze playing across your face, the pies on the windowsill, and all the other inexplicably good things that make a moment vivid and alive. And like many other pop songs that haven’t been through a thorough pre-chewing by the blog mill, it doesn’t necessarily provoke a lot of talk. Its appeal seems to be visceral, not verbal, and an analysis of its merits goes like, you know: good beat, good tune, and hey, I like that reverb.

This goes for most of the tracks on (don’t let this title turn you away) Wuts Goin Thru Yer Head. There’s a sort of un-pinpointable appeal meandering through this album that probably has something to do with the way electro and shoegaze bump up against one another like untethered boats, while carefully constructed melodic lines suck the listener along with the undertow. Yet I suspect that the deeper reason that this album resonates so hard is not the delay pedal (har har)—it’s the way the lyrics inject a sense of consequence into a genre that is often about nothing.

I’m not just talking about traditional pop music here. A whole lot of music that’s being made today that floats within the general orbit of North American “indie” is apolitical, anti-narrative, and not really invested in illuminating the human condition (not surprising considering that for a lot of us in this community, the human condition usually involves looking at pictures of cats on the Internet). As per usual, when given a powerful medium for expression, most of us don’t know what to say. Which isn’t bad, but just is—and unfortunately, you’ve gotta fill those vocal lines with words. For some, the solution is to dive unabashedly into triviality (occasionally with amazing results) while others assume the role of the esoteric aesthete, rejecting meaning for supposedly meaningful signifiers (hence, perhaps, the trend of having the word “wolf” in your band name being replaced by the trend of having the word “AIDS” in your band name).

Little Jungles (aka Matthew Niemann) does neither, sidestepping the whole mess by writing lyrics that are meaningful, if emo-tinged, dispatches from everyday human struggles. “Drive Yerself Crazy” wrestles the fractured core of an imperfect relationship into a couple of simple lines: “You’re always telling me / All the negative things / That I know I could change / But it takes a long time to change.” And in a few songs, Niemann writes about music itself, looking at the big issue that led to this album, this review, this website: how a relationship with music can both enhance and hinder one’s relationship with the rest of the world. The line, “I won’t get it over it easily / I’m still thinking about / When you yelled at me last week to turn it down” in “Old Love Fading” is not a tantrum, but an acknowledgment of the sort of rift that opens up when one person’s passion is another’s annoyance. And when in “Our History” he sings over euphoric synths, “I found who I am / I found out my purpose,” it’s not tacky but moving, because Niemann’s purpose surrounds the words, envelopes them. As in the best pop, the sounds and melodies here reinforce meaning.

And it should be mentioned that these sounds and melodies could stand alone. “Blue Heron” is so thickly textured that just the fuzzed out synths and the steady bass-drum inspire the kind of “yes, yes, yes, this rocks! No, no, no! Don’t stop a-rockin!” head-nodding that goes beyond agreement to total communion. And “Please Put the Knife Away” spills horror-house organ all over a hip-hop beat, resulting in a kind of riveting zombie dance track. All this from an album I thought was destined to be a brief, summer fling. Well, the sun is back behind its cloud, and the ice re-froze, but I’m still listening. After all: good beat, good tune, and yeah, that’s some nice reverb.