Other Records by Living Things 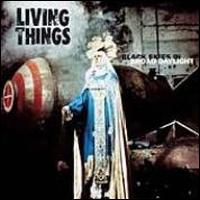 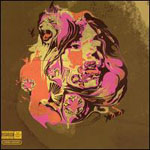 Ahead of the Lions

Thoughts I had while listening to Living Things:

2. I think the lyrics to "Bombs Below" are "Wear a cone / no whizzer stone / Where the mokas / Where's your shawl? / But if you come along / YEAH YOU'LL BE ALRIGHT." And it's actually pretty cute that Lillian Berlin wrote a song about trying to persuade his kidney-stone-prone, half-deaf grandfather to come to Sunday dinner with the rest of the Living Things. Very Christmassy.

4. If Trooper were harder like AC/DC and had a brunette David Bowie circa-most-effiminate-moment-for-him as a lead singer then they would be Living Things except for the fact that Trooper are re-immortalized weekly at hockey games and are therefore some weird kind of Canadian Ice Zombies.

5. Taxonomy is the new dead science.

6. No wait scratch that. One day, a young Billy Joel dressed up as half-David Bowie, half Lily Tomlin for Halloween. He got drunk at a hockey game and had a love child with himself. 7 months later, Lillian Berlin was born.

7. You see a picture of these guys. You think "As far as ironic band names go..."

8. If Living Things were WWE Beauties, Howard Finkle would introduce them as follows: Hailing from THE BATHROOM IN A SMOKEY BAR, resembling ATTITUDEY NEW YORK PEOPLE, at a total combined weight of …. (must be a typo)…, IT IS LIVING THINGS – who play guitars and drums and basses and SING and deep voice and HOWL AROOOOOOOOOOOOOOOO." Living Things would be former bad-beauties that have recently been betrayed by other bad-beauties, and therefore would have won over the crowd, especially when grappling in hockey arenas, and be fan-favourites, like Golddust was.

10. On the website, when asked what his influences were while he was writing the album, Lillian Berlin cites Malcolm X, JFK, Castro, Muhammad Ali, Tupac Shukur, Sylvia Plath, Arthur Rimbaud, and Noam Chomsky. The logical thing to do after reading this is, of course, to immediately eat a pork chop and some organic cigarettes, then spread out the album's liner notes on the floor, close your eyes, spin around 38 times very quickly, stop, vomit, and reproduce on the internet the portion of the liner notes that was left untouched by your puke, like so: "Ignore them Orders / Cause God Made Hate / All Hail Die the Maker / Make Him Walk In Death / In the House of Abortion / I Bleed Intensive Care" (from "God Made Hate"). In cultures more peaceful than our own (perhaps Asia), this ritual would prove that North American high school curriculums are just fine.

12. Lillian Berlin says in the "song" "I Owe" (in which the word "Oh" is incorporated with "Owe" in a very stylish onomatopoeiaic double-entendre) "Got a letter from the tax man / says I owe / OH! / Well it's not my generation that owes!". Aaron Newell in this review says: "You twat, your generation voted in George Bush who has wasted some godawful load of cash lately don't you think so yes, yes it does owe, you twat." I hate this irresponsible "political" shit.

13. The argument is always there that music like this exposes 13 year-olds to names like Sylvia Plath and Rimbaud and Malcolm X for the first time, and therefore if it causes a 13 year-old to go out and read that stuff then it's done a good job. I'll concede to that, I mean, I first heard about Alex Haley's Roots from Kool G Rap: "Fruits / I rip em right out their roots / like Alex Haley". That's not exactly enlightened, either.

14. But since CMG's readership is comprised of people who know better, I feel safe recommending that none of you guys buy this. It is to critical thinking what Louis XIV is to women's lib.