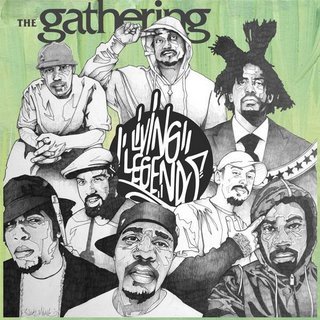 The Living Legends, of an ironic moniker and modest west coast origins, have, in wake of Murs’ relative stardom, Grouch’s recent collaboration with Zion I, and its eight members’ various solo projects, found themselves unable to assemble since Classic (2005). Perhaps this time apart has allowed each member to more fully realize their own personalities, that finally working together for the first time in years has sparked the outfit’s creative pulses, but The Gathering is mostly just the assemblage of a smoke-filled vanful of moderately talented shit-talkers displaying some impressive synergism.

“The Gathering” feels like a mission statement, which Murs confirms with his triumphant adlibs interspersed throughout the track. But the simplest elements of the opener imply more than bombastic proclamations ever could: a defiant, hollowed-out stomp anchors floating synths, the Legends collectively blacking out, seamlessly slipping in and out, delivering slick jabs that pack more wallop than warranted due to their incredulous self-assurance. A certain blue collar ethos permeates the Legend’s entire offering, as iterated emphatically by Murs: “All the pain and the sufferin’ / The man I am today is because of all the strugglin’.” Fortunately, statements in this vein are kept to a minimum; the indie rap attitude is displayed through the infectious simplicity of the EP more than through explicit statements. Keeping the pretentious “independent as fuck” minutia at an acceptable level leaves more room for cheeky lines like “I’m Wayne Gretzky / But way too sexy.”

Though The Gathering initially seems like a pool party of a record that recalls Pigeon John’s oeuvre, the EP takes a cynical turn with “Pants On Fire,” depicting an American public alienated by its government, housed by eerie electronics, the track’s (intentionally?) low budget blips and pseudo-sirens saturating a simplistic drum pattern, each member stepping to the mic to indignantly air their grievances—which becomes a bit monotonous, as obvious claims are rendered repetitiously. The superior “War And Peace” carries on similarly, boasting a pleasantly nuanced beat, subtle atmospherics couching instead of covering the rhythm. Slightly more specific qualms are raised as each MC grounds the Iraq War firmly in their own reality, easily making the focused conceit more affecting than the previous track’s conspiracy theories and broader generalizations.

The variety of beats on The Gathering is formidable and the group members shift their flows accordingly to the diverse selection of backdrops. This helps break up the monotony of 30 minutes that, despite the collection’s politically charged two-track suite, still consists chiefly of braggadocio and tour bus anecdotes. The EP travels with each track to a distinctly different landscape, from the jazzy keyboards of “After Hours” (which bears a striking resemblance to Digable Planets’ “La Femme Fetal”) to “Luva Changer”‘s electro-soul to the Miami bass of “She Wants Me.” These varying compositions, by providing each track with its own distinct tone, demand the group members to explore the different facets of their personalities, and while the actual rapping never rises much above “mildly clever,” multifariousness and brevity afford the record a palpable momentum, a sort of spontaneity that distracts the listener from the somewhat limited talent on display.

At its core, this is a collection of songs best suited for summertime activities, and in that respect the timing of this release is impeccable. It may feel, when the glass is half empty, like the Legends are ill-equipped to deal with the topics they choose to tackle, but a majority of this, their most recent reunion disc, generally improves on their own brand of amiable hip hop while expanding their aural palette into more intriguing territory.