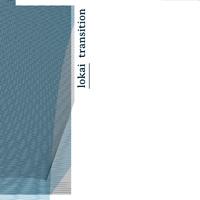 I’ve been turning the notion over and over in my head for days, rolled the phrase around on my tongue, and can say that with each subsequent listen to Transition it feels right to declare the album Austrian duo Florian Kmet and Stefan Nemeth’s masterwork. Last year it was Jacaszek’s Treny that came along and demolished me effortlessly with all of its magnitude and control, with the way it reined excess to frozen focus. This year it looks as if winter’s come early.

What Lokai muster in the creaking, shuffling, evocatively textured and stunningly melodic “Roads” and “Roads (reprise)” seems nothing less than time itself—how the trembling dread of something primal and unrestrained blossoms gradually into order and movement and dynamism and tempo and back again into the lonely creak of its own decaying ebb. It’s as if Lokai are presenting the listener with the universally reverberating horror show of the inevitable and cyclical process of building up and breaking down, of growth and decomposition, to which we’re all unavoidably subject. To suggest as much about an instrumental record will signal to some nothing more than that this sounds “spooky” and sure, there’s that. It may be along with Sun O)))’s Monoliths & Dimensions a coda for our post-Obama millennial insecurity, the inevitability of…something. One can’t help but feel this mood is somehow prescient as we watch the once-utopian mores used to describe Obama’s election to the Presidency melt away into a razor wire of the healthcare debates’ hysteria and right-wing fundamentalism. But Transitions is no lazily aesthetic pastiche, no simply grumpy goth. Everything about it implies deliberateness.

Start familiarizing yourself with Lokai and the maturity of the record, its startling efficiency, starts to make sense. Kmet and Nemeth’s collaborations across the German and Japanese jazz landscape are many, an impressive resume that laid the foundations for Transition, only two years and several collaborations removed from their debut 7 Million (2007). Each song moves with a principle, a crystal rationale, each segment playing a role in the tonal themes and movements the duo develop with their spotless sense of pacing. Laptop pastiche has tended towards awkward amalgamations of non-intuitive sounds so that even when it works there’s a feeling that the music has been stumbled upon, of the artist groping through a deluge of source material in the hopes of making a Frankenstein’s monster that somehow knows how to sing. By comparison, Transition‘s nine short tracks move with an economy of purpose, all emerging sounds that rub against each other in interesting ways and eschew the con-game of staggering contrast and confrontation. Lokai don’t sound like they’re challenging listener expectations, but are instead charming—even when they’re terrifying—with effective, graceful arrangements.

Most of these songs move like a curious moan of air through a darkened and deserted house. There’s something about the way “Glimmer” uses a single, forlorn shaker and seemingly found-sound chimes to evoke haunted detachment before the impeccably mixed acoustic guitar creeps in and transforms the song from alien to familiar. Or how “4 am” opens with dissonant semi-gongs that groan into semaphore percussion and fever dream cymbals prompted into ambient background music. These are just a few of myriad emotional shifts, catalyzed somehow in each minimal arrangement, which Kmet and Nemeth produce with the meager tools an electro-acoustic band affords. Lokai seem uninterested in a discussion of methodology, as uninterested as an oral storyteller is in their own voice, and instead sacrifice all context, performativity, and individualism to each perfect and particular sound in that moment.

Admittedly, I’m a sucker for a precisely scoped album; I read the spaces in an album as evidence of mature songwriters at work to the same degree as I hear excess as the signature of bet-hedgers. And with that paradigm in mind Transitions‘ excellence is obvious, engaging and evocative perhaps in the same way as Supersilent. A stranger but perhaps more appropriate comparison is Phoenix’s Wolfgang Amadeus Phoenix: each album is to its respective genre an indication of what is possible when the overarching rubric is to cut away and make sleek, rather than to emboss and cater to every misconceived whim. Both albums, whatever their moods suggest, are single-minded killers. It’s possible that you won’t hear a more efficiently visualized set this year.