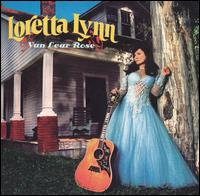 Having lived in the country almost all of my life, surrounded by tractors and buggies and worms and corn and the stench of manure, I often felt like a displaced subject. I divorced myself from the country. I didn’t chew. I didn’t wear overalls. I didn’t talk about greasy parts of heavy machinery that help the seed find purchase. These aren’t really stereotypes; I spent my years witnessing the reality, and I tried to escape it. I read old British literature; I watched foreign films; I listened to a lot of hip-hop and metropolitan rock, not the Travis Tritt twang that cluttered up just about every radio station that reached my homestead.

But that wasn’t really home, was it? Now, in the computer lab of a college residence hall a few blocks away from a hemp-strewn record store, I want to spit at the carpet in front of my toes, nod slowly, and mutter with content, “Yup, this is where I belong.” Then I listen to Loretta Lynn’s Van Lear Rose, and I remember all that’s good about the country, about the warmth of earth and earthy faces, and I get a little homesick for that home in which I don’t belong.

Sturdy hips in summer skirts swing to the old cronies boisterously hooting as they raise overflowing amber mugs while pipe smoke fertilizes the air with a whiskey tobacco scent, and Jack White stomps his foot and fiddles his guitar in the musk of the rural ether. On “Portland Oregon,” he duets with the fine aged beauty of Loretta Lynn’s voice, a crystalline stream that could only be found in the country: “Well, sloe gin fizz works mighty fast / When you drink it by the pitcher and not by the glass / Hey, bartender, before you close / Pour us one more drink and a pitcher to go.”

White’s arrangements and production are simple and effective, clear without gloss. He’s trying to give his idol Loretta his best, but he’s not trying too hard. That last part’s essential to what makes the album’s music work so well; The Do Whaters do just what is needed to accompany the coal-miner’s daughter. Bass, drums, dobro, pedal steel and slide guitar, organ and piano, electric and acoustic, any and all instrumentation is applied deftly and organically to make no statements, just good music. It’s an album completely foreign to a world of pretension.

From the pleading rockabilly march of “Have Mercy” to the reverent folk hymn of “God Makes No Mistakes,” Loretta’s songwriting quill never scratches over the course of the first album where she penned all the songs, and her matured vision holds far more vitality in its conception and execution than the cheap beer, crocodile tear brine offered by today’s young country contemporaries. One of the most stunning moments of symbiosis between Loretta’s words and the instrumentation occurs at the end of “Women’s Prison.” Lynn croons, “Now they’ve strapped me in the chair / And covered up my eyes / And the last voice I hear on earth / Is my mama’s cry.” Then it’s nothing but organ, sleeping percussion and guitar notes as Lynn mutters a bit of “Amazing Grace” before The Do Whaters rock out for the last minute of the track.

It’s the sound of the place I grew out of that I really feel when I listen to Van Lear Rose, though. It’s that quality that moves me most. On “This Old House,” Loretta sings, “Oh, if this old house could talk / What a story it would tell / It would tell about the good times / And the bad times as well / It would tell about the love / That lived and died inside these walls / And the sound of little footsteps / Runnin’ up and down the hall.” For most of my life, I have lived in a big, century-old house with my many siblings running up and down the hall. Loretta winks on “Story of My Life,” telling of how she “got a feller right over the hill / If he asks me to marry, well, I know I will / He asked me to marry / got kids of four / And I’m tellin’ you / I don’t want no more.” My mother said the same thing several times, but I think she was pretty serious after the eighth one.

I, however, did come down. Here I am in the itty bitty world; I am blinded by the busy bustle; I am removed from that reclusive high point where “We lay on our backs / And we count the stars / ‘Cause up here, folks, heaven’s not that far.” Van Lear Rose is a reminder of something that will always be a part of me, something that Loretta Lynn manages to embody the best essence of. So, whenever the day may come, let me return to the soil that I grew from, let my family bury me back with the woods and the hills and the dirty gravel roads.