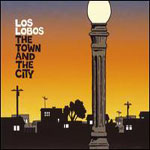 The Town and The City

As an institution, Los Lobos is uniquely American; however, the band suffers because of it. The music that the band has been making for more than 30 years is a fusion of Mexican principles, all-American rock drive, and some thoroughly experimental impulses. It’s not easily definable: too Americanized for Latinos; too foreign for the heartland; too normal for the indie kids; consequently, it lacks much of an audience. More recently, the band has further suffered due to assumptions that inevitably come when a band reaches its autumn years: personal tragedy and a string of weak albums in the late-‘90s seemed to suggest Los Lobos was wrapping it up. Last year saw the release of a live album, and Hollywood put out the band’s third best-of compilation earlier this year (hardly a reassuring step).

The band’s twelfth studio album, The Town and The City, is therefore something of a surprise. But beyond the fact that it exists at all, even more surprising is that Los Lobos sound fresher, more invigorated, and weirder than they have in years. You can chalk this up to decreased expectations, high stakes, or political climate, but not only is Town a good album, it lives up to the promise of the band’s best work, sitting comfortably next to records like Kiko (1992) and How Will The Wolf Survive? (1984). Their best album in a decade, it shows the continued importance and growth of a band that has been together even longer than Sonic Youth (yeah, it’s possible).

The record is obliquely political, and many of these songs are clear reactions to recent debates over immigration and overt racism within the U.S. today. Los Lobos, their melting pot sonics an American amalgam, have the song-writing chops to pull off the politics without resorting to empty slogans or platitudes. “Hold On” is the best example; it lovingly recounts the story of the migrant worker barely scraping by. Both “The Road to Gila Bend” and “If You Were Only Here Tonight” get at the frustration and pain of missing someone, while opener “The Valley” is a fond recollection of a home far away.

The music, especially on the first of the half of the album, matches this sense of alienation, the band making interesting sonic choices that keep the listener off-balance. The percussion is jittery, the tones are never quite right, and they’ll occasionally throw something really weird in there, like the subtle clicks and whirring on “The Valley.” Underneath the experimental gauze are some great compositions, and they brilliantly shine through; when the pieces fall into place for “Hold On,” the band suddenly hits a thick bass and organ groove in a breakdown that never ceases to impress.

The latter half of the album (the City half, one would assume) is something of a return to standard Los Lobos fare, but well above average. “Two Dogs and a Bone” is a straight-ahead rocker, while the soulful “Little Things” is one of the loveliest songs the band has produced to date, echoing their work with Bobby Womack on The Ride (2004). Cesar Rosas and David Hidalgo, always wizards on six strings, really let loose on the latter, developing a gorgeous interplay that’s matched by the thick organ part and lush production. “The City” gets back into some of the sonic weirdness of the album’s first half, while the beautiful “Don’t Ask Why” is nearly as good as “Little Things.” The breezy “Free Up” is the album’s only real misstep, especially coming before the dark, gritty “The Town.”

At this point in their careers, the members of Los Lobos have little to prove. They’ve released a couple great records over the last few decades, and a handful more that are quite good. They’re one of the tightest, most energetic live acts I’ve ever seen, despite the fact that they’re all well into middle age; yet they’re still at it, still finding new ways to expand their sonic palette, explore the atmospherics of their recording, and play with the possibilities of their instruments. And they do all this while remaining, fundamentally, just another band from East L.A.