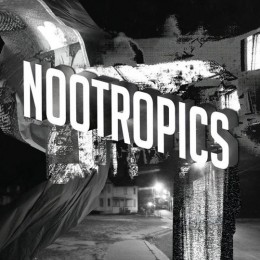 Lower Dens have come good. This Baltimore quintet’s second album presents an alluring mix of weird Americana, slightly outmoded space-rock tropes that are right now blipper-bleating back into fashion (see: Girls’ continued appeal to the spirit of Jason Pierce, Esq.; the entirety of Deerhunter’s zombie-punk corpus), and a fetishist’s approach to reverb that sounds tastefully miserable. Nootropics—what the press release calls “a reference to Lower Dens’ interest in transhumanism”—is engineered to the point of obsession, with a focus on no-nonsense rhythms that don’t so much evolve as they drift between nodes of slight strength and spectacular vulnerability. This thing, in short, bumps, even if it is dancing in lock-step on top of a burial vault.

A welcome new start for this talented band, then; and sure enough, after the slightly wobbly goth-isms of 2010’s Twin-Handed Movement, a new start is ‘xactly what the doctor ordered. But this is a “new start” that is not exuberant or forthcoming or expressive in the least. Starting with the vacuum-sealed percussive snickers on “Alphabet Song,” where the Dens effectively re-format their entire approach, the album presents a disarmingly clean facade. Yes, there is energy, but it is the meticulous energy of an addled neurotic who can’t for the life of him loosen up, and likewise, the pop hooks, though present—“Candy” is blissfully morose like the xx—are undercut by a pervasive nastiness.

As if everything in this universe is hollow and forgettable, the Dens let some notes ring out for what feels like an eternity. And then, all over the place, are these pedal-effects—what initially feels like a dense, monochrome cloud that weighs down every track; but then, once you get the feel for the core of Nootropics, its contours, its knee-jerk hooks, its underlying theme of optimism amidst total fucking direness, the weighing-down becomes, well, kind of essential. After a while, comforting, almost.

Each chord here is followed languorously by a trail of spectral feedback, echoes into a subconscious aether where planetoid-sized opium pods host never-ending alternative rock concerts, eventually giving-out to the slow claps of a hundred thousand vague mutes. If you thought Charalambides had the soul-in-a-ditch thing all whipped, then you’re in for a very pleasant surprise. Nootropics is the sound of truly expensive unhappiness; its unhappiness is simply more—that is, more beautiful, much, much more beautiful—than your unhappiness. Nootropics sounds like an endless, unflinchingly-grim fade-in, married to an over-mic’d kraut rhythm—probably as good a use of obstinate-sounding krautisms as any in indie rock over the past couple years. (Indie rock: take note.) This is an album that positively overflows with give-a-fuck ‘tudisms, even whilst it lingers on the same, stultifying note for over twelve minutes (“In the End is the Beginning” is quite possibly the closer of the year so far).

I will admit that listening to this thing—and I mean really listening to it, front-to-back, without falling asleep—is actually really difficult. I do suspect more than a few people’s response to Nootropics will be along the lines of a cavalier shrug, quickly followed by an urgent, almost painstaking trip to the Recycle Bin. But these songs have a way of infiltrating your system. Like the sleepier pieces made by Brian Eno in the 1970s, or even the pure-mushisms of the recent My Bloody Valentine remasters, there is a lot here to take in—too much, really, for a cursory listen: all you’d get is the same sound spilling over and over again into lame-ass infinity. No, Nootropics requires immersion.

Where Jason Spaceman leveled us all this year with a single, film-coated Huh?, the Dens’ Jana Hunter is wont to keep more schtum, singing very calm and slow, as if any sudden movement might lease out an embarrassing booger. Which is not what the ambiance-heavy songs on Nootropic demand: emotion, caterwauling, the spirit of the animal moment, it’s all nixed in the favour of a highly studied and occasionally spiky diffidence. Even “Brains,” the tentpole first single and this album’s most innervating moment, offers us exactly two, maybe three chords—the song is almost “gabba-gabba” in the context of Nootropics, where most evolving progressions are dropped for stirring drones, and the chiaroscuro sweep of the entire piece is more important than any one individual track.