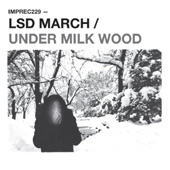 I think I’m going to be building on some smoker’s lungs blackness as this review progresses, so let me make this explicit: Under Milk Wood is great. Great in the same way simple things like post-coital omelettes are great; great like “man, how awesome are roller coasters?” And maybe you’re a celibate vegan who doesn’t like roller coasters, but you get my point: this is 78 Cokemachineglows of “good,” and that should be laudatory enough to stimulate mild interest.

That said, I can’t escape the feeling this record’s lowering me into the grave it’s dug for itself. Over the last month, another frigid Chicago winter dissipated long enough to remind us what hope felt like, then gripped us by the proverbial balls and submerged us in Lake Michigan. I’ve been listening to this record the whole time—and I kinda feel responsible for this whole icy hatefuck thing. When I could see grass, I should’ve just said “fuck it, guess I’m not reviewing LSD March,” thrown on Low End Theory (1991) all “woo-hoo, Spring’s here” and then maybe the weather gods would’ve been confused, forgotten it was February, and continued the merciful ice-melting. But no, I had to wrap my meager wingspan around this boulder of dread. So while sensible people were frolicking in the 60 degree splendor and sunlight, I was pressing my ear closer to my speakers wondering if this immovable chunk of psychedelic discontentment might exorcise itself. Now, after squandering the joy of pre-equinox warmth, it still hasn’t because that’s precisely what it fucking is. It’s stuff that takes a bit of time to swallow, but you’re better for accepting it.

So, Under Milk Wood: great, desolate psych-rock. If you’re into that sort of thing. It mumbles and trips along until it seeps right into your being if you throw it on headphones enough at 2 AM, and it’ll kill any dance floor within seconds; which is a synopsis of what it is as a whole, which isn’t all that different from a description of its parts, but the parts are great enough on their own to warrant distinction. Before illuminating the death on your shoulder, “Bisyonure No Kimi” lets out a dying wail and we’re all a little unsettled. “Shiroi Sekai De” feels like a monotonous journey, quiet chords plodding along with the perfunctoriness of an alcoholic’s footsteps to the liquor store. The levees burst on “Ai No Sakebi,” where vague specters take the form of palpable terrors, strained guitar notes bleeding through and reverberating eerily like stones off a church bell.

“Dare ga Hoeru” is the respite from the resolute sadness of the album’s first half. It’s immense and heavy, howling but not haunting. If anything it plays like a distorted bastard child of Screamin’ Jay Hawkins, big almost to the point of self-parody, but U2 ain’t got a bop like this. And then we skitter around, perhaps grow a bit nauseous on “Taiyo No Uta,” “Kimi No Uta Wo Kiite Boku” slugs us across the jaw with plastered hands, our battered psyche says “uncle,” and we go home happy (figuratively speaking).

Oh, wait—I forgot about the part where LSD March pins a fake mustache on its corpse. “Wa Akuma Ni Natta” is a pleasant enough bluesy groove interrupted approximately evelenty gajillion times by a producer barking instructions. I assume this is funny to some people not in LSD March (I hope?), but at the conclusion of an achingly beautiful slew of funeral processions, and in wake of the effective levity of “Dare ga Hoeru”‘s riffery, it feels entirely superfluous and nonsensical.

Some lovely beacon I caught coffee with nearly a month ago, who was kind enough to indulge my austere musings on this record, recommended I cease listening. I rationalized lamely that I couldn’t, and now, a few weeks later, I still can’t. Yeah, Pet Sounds would do something significant for my mental health, but I’m transfixed, or more accurately, transported and trapped in a nightmare in which I travel in a hallucinogenic haze across a landscape resembling Hoth, mind quivering because snowbanks might sprout jaws and consume me. The imagery is both internally terrifying and externally kind of awesome. And it’s a testament to how, again, great this record is: I don’t dream up half-baked scenarios of tragic death for just any record (true); I have better things to do (a lie).