Disc 2
1. Something Wicked This Way Comes
2. Big Mess
3. When I Look at the World
4. Walk On
5. Temporary Nature (Of Any Precious Thing)
6. Everything But the Truth
7. This Old Heartache
8. Stowaway in Your Heart
9. One More Day
10. Magnolia 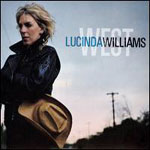 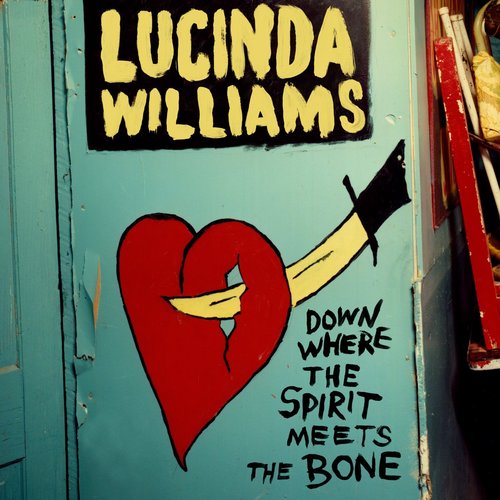 Down Where the Spirit Meets the Bone

Down Where the Spirit Meets the Bone, Lucinda Williams’ eleventh studio album, takes a long time to listen to. It’s two discs and twenty songs, which range from two and a half minutes to nine and a half, and are mostly slow, dark, and soulful. But Lucinda Williams has earned our attention. She’s an artist that turns out consistently great work that still feels vital to her many fans, despite a down-tick in hype following 1998’s much-praised Car Wheels on a Gravel Road. Over a 35-year career, Williams has had no ill-advised experimental period or stab at mainstream success, only time spent patiently defining her own style in front of growing numbers of fans, with some records more memorable than others.

Down Where the Spirit Meets the Bone is one of those memorable ones, perhaps her best since Car Wheels. It’s a record of melancholic, world-weary songs that feel like driving slow through a beautiful snowstorm. And despite its length—from the long mouthful of a title to the four full sides of vinyl to the nearly ten-minute closing track, there’s nothing here that can be described as “filler.” Lucinda Williams wouldn’t allow that. She’s earned our attention, and she knows how to hold it.

“A lot of times,” Williams said in a recent Rolling Stone interview, “I just write about the eternal sadness that never goes away.” This is a characteristic that might scare away the casual listener: the unflinching way Williams handles sadness, despair, loneliness, anger, and all manner of unpleasant emotions. But there’s beauty and joy in her music as well, meted out in small portions, just enough to illuminate this record like a flickering candle. These small moments serve to turn the mood of Down Where the Spirit Meets the Bone into not simply sad, not simply happy, but something in between and more akin to real life. One of the album’s highlights, “When I Look at the World,” in fact, seems to turn Williams’s statement on its head: it speaks of an eternal contentment that never goes away, despite life’s devastating lows. “I’ve had some bad dreams / I’ve been filled with regret / I’ve made a mess of things / I’ve been a total wreck,” Williams sings in a cracked alto, “But then I look at the world in all its glory / I look at the world and it’s a different story / Each time I look at the world.” This hopeful glow infuses much of the album through other gorgeous tracks like “Walk On,” “Stand Right by Each Other,” and “One More Day.”

Though these and most of Williams’s songs tend to deal in universal emotions and experiences, Down Where the Spirit Meets the Bone also delves into the personal in creative ways. Most notable is Williams’s tribute to her father, the poet Miller Williams, who was recently diagnosed with Alzheimer’s disease. Instead of writing her own tribute to him, Williams takes the much more interesting route of reworking one of his poems into a song, the stark “Compassion,” which begins the record in a defiantly noncommercial gesture.

There’s also a bit of a Southern Gothic theme to Down, which reflects Williams’s Louisiana upbringing and often-cited fascination with authors like Flannery O’Connor and Eudora Welty. “West Memphis” focuses on the now well-known story of the West Memphis Three and the experience of being persecuted for difference in a small southern town, and “East Side of Town,” paints a picture of the economic divide felt everywhere in the country, but particularly in New Orleans, a city that remains severely segregated post-Katrina. “Something Wicked This Way Comes,” is less explicit in subject but the most southern-tinged in sound of all the songs on the record, with swampy bayou guitars and Williams’s menacing vocal, like a fire-and-brimstone preacher drunk on his own dark visions.

The most striking thing about this record is the tremendous ease with which Williams covers a broad swath of territory, mixing topical songs with those that skirt around any topic; rollicking country-rock stompers (“Foolishness,” “Protection”) and mid-tempo Tom Petty-style tunes (“Stowaway in Your Heart,” “Big Mess”) with entrancing ballads (there are many, the best example being the graceful, shimmering cover of J.J. Cale’s “Magnolia” which closes the record). It all feels so right, not a word out of place even in songs that repeat the same words over and over. Williams sounds totally comfortable with where she is as a songwriter and vocalist, and with her band, a large group of collaborators new and old—most notably Greg Leisz, whose swooning electric guitar, pedal steel and lap steel are the real glue that holds the record together.

To attempt to wrap up a long-winded review of a long-winded piece of work, Down Where the Spirit Meets the Bone is a great record. So great, in fact, that you might forget that it’s one in a long career of great records by a sixty-one-year-old musician. It has the energy and ambition of someone with something to prove, which Williams, after all her success, does not. But she continues to prove herself anyway, again and again: here throughout twenty songs, and throughout thirty-five years and beyond.