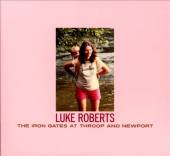 The Iron Gates at Throop and Newport

Those familiar with Brooklyn might recognize the title of this, Luke Roberts’ second album, a nod to the singer-songwriter’s current home. Yet Roberts’ music sounds much bigger than the borough: The Iron Gates at Throop and Newport is big sky music, tinged with the loneliness of rural America, littered with remnants from an Appalachian childhood and a young adulthood spend wandering the American West. Armed with a fiddle player (Billy Contreras) and a voice like burnt toast, Roberts creates an album of shimmering simplicity, capturing the ever-rolling push and pull between urban and rural, past and present.

Roberts crept into a few hearts with his 2010 debut, Big Bells and Dime Songs, released first on Thurston Moore’s Ecstatic Peace label and reissued last year by Thrill Jockey. That record, produced by Harvey Milk’s Kyle Spence, was considerably darker than Iron Gates, but together the albums are remarkably consistent; hints of growth and new flourishes abound this time around, but Roberts comes across as a fully realized artist more than a guyworking steadily on his craft. Like its predecessor, _Iron Gates _ is first and foremost a master class in mood: from the aching fiddle of mesmerizing opener “I Don’t Want You Anymore” through the Nick-Drake-like plucking of “Second Place Blues,” there’s not a note or word that feels out of place. Not to mention the record was recorded in Nashville with producer Mark Nevers of Lambchop, a band whose influence can be so easily heard in the way Gates‘ songs subtly shift and swell.

Roberts’ rough, melodic voice recalls Jeff Tweedy c. Uncle Tupelo, and it grounds these delicate songs in a certain gritty, world-weariness that few young singers can pull off without seeming disingenuous. It helps he’s not alone: Contreras and cohorts like Paul Booker (electric guitar) or Ryan Suther (blazing harmonica on “Lost on Leaving”) flush out and resolve many cuts. Though these are all relatively downbeat folk songs, Roberts keeps a delicate balance between light and dark, with enough illumination on “Cartier Timepiece” and “Will You Be Mine” to temper the shadowy spaces of “His Song” and “Spree Wheels.” “His Song” in particular leaves a haunting impression, its host of female backing vocalists and sinewy electric guitar ghosting up the corners. Roberts sings ambivalently of his search for faith, his voice catching on the refrain, “It’s an every day job.”

Roberts is not a particularly complex lyricist, but his carefully chosen words speak to the conflict seemingly inherent in the divide between urban and rural (besides geography): old-fashioned vs. modern. Though the sound on Iron Gates rests comfortably in dark-green Appalachia, flickers of city life emerge. “Spree Wheels” is the clearest example of this; lines like “This is my home / White, blue, and green / Like a spree wheel rolls / Kind of wild and mean” applying to either the city, the country, or both. “Wild and mean” is both attitude and landscape. “Cartier Timepiece,” one of the record’s highlights, offers a similar juxtaposition between urban expressway and rural rail, from “New York sun / Texas T” to “Greasy rails / Timber bridges / Up the hills and / Down the ridges.”

From the mountain railroad winding up the cover of Big Bells and Dime Songs to the city gates conjured in this record’s title, it’s clear that Luke Roberts relies on a specific sense of place for inspiration. Best heard under a starry sky? Sure. But the listeners’ perspectives, be they from a narrow fire escape or a backwoods porch, matter not. The music of The Iron Gates at Throop and Newport is about as universal as this stuff gets.