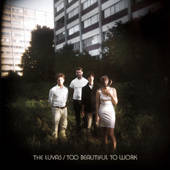 Too Beautiful to Work

Luyas frontwoman Jessie Stein sings in a childlike coo and occasionally plays a Dutch instrument called a Moodswinger, a custom-designed 12-string electric zither. The Moodswinger makes a low, mournful sound that anchors the Luyas’ wide-eyed, off-kilter pop to a modicum of darkness. Did you have an art teacher in the third grade who made you create cubist paintings out of bits of construction paper and Magic Markers? I did. If those portraits could sing—and play electric zithers—I’d imagine the sounds coming out of their mouths would sound a lot like the Luyas.

The Luyas are from Montreal, and their sound is in keeping with that particular aesthetic of indie rock bricolage we folks not from Montreal have come to identify with their scene. In fact, the line-up on their second LP, Too Beautiful to Work, is something of a Montreal indie bricolage itself: Bell Orchestre’s Pietro Amato and Stefan Schneider are permanent players, while Owen Pallett and Sarah Neufield of the well-known band Arcade Fire make some orchestral cameos.

Similarly, Too Beautiful to Work is an album in shards. With an impromptu crash, it shatters like a mirror halfway through the second song, “Worth Mentioning,” and for the next 30 minutes the pieces stay afloat to jangle and glint across the record’s crowded soundscape. These shards are nothing to fear; none are pointed enough to prick, but their greatest impact comes in the moments when they cohere into moments of occasional, fleeting brilliance.

The indisputable highlight of Too Beautiful to Work is also the finest song the Luyas have yet recorded: “Cold Canada.” It’s the sole moment when the record gathers all of its opposing forces together, and all of the shards briefly reassemble into an anthem of modestly orchestral pop. “Cold Canada” is an ode to feeling simultaneously defeated and inspired by the place you call home. “Whatever horizon / Snow will always win,” Stein sings of her surroundings, betraying a certain acquiescence. And then the song builds to a sublime chorus: “We’re gonna lose,” the last word held out maybe longer than any other syllable on the record, long enough to transform defeat into triumph, wind-chapped skin into beauty. Who needs winning when losing sounds this good?

The only problem with “Cold Canada” is its placement on the album: the seventh track of ten, its dynamism is needed much earlier to pull Side A out of a rut. (Call it “Sprawl II” Syndrome.) Instead of continuing to propel an album that starts strong with the melodic staccato of “Too Beautiful to Work,” “Canada” ends up buried beneath a grouping of more inert tracks, weighted down by the sometimes excessive layers added to songs in the spirit of hectic experimentation.

The dreary and too-long “Canary” in particular is a momentum killer, and its refrain of “I dream of drowning,” sung in Stein’s coy falsetto, doesn’t achieve the dual impact of innocence and darkness it seems intent on conveying. “Canary”—and much of the rest of the album—grasps at a complexity that it does not quite achieve: a mood so serenely pretty it’s actually grotesque, or to put it in the words of St. Vincent, who so masterfully captured that particular aesthetic on Actor (2009), one of “laughing with a mouth of blood.” Too Beautiful to Work isn’t focused enough to create an atmosphere that whole, and for all the virtue of its experimental tendencies, “Cold Canada” shows the record might have fared better if it wasn’t so antsy. “Listen to me so that I can speak,” Stein sings in an uncharacteristically sparse moment. If they cut out some of the compositional chatter, the Luyas might be better heard.