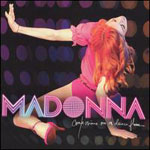 Confessions on a Dancefloor

The great thing about reviewing a Madonna album is that it’s really easy to get away with failing to reference her old material --- or, more importantly, it’s really easy to get away with neglecting to talk about her music at all. Sure, we can sit here and tell you all about their socio-cultural implications, but how many of us can say we’ve heard all fourteen studio albums from front to back? I’ll cop to hearing eleven all the way through, and I’ll assume that puts me at the very least even with most of my contemporaries. I’m Breathless? "Vogue" gets enough retro-radio play to put me at ease about missing that one. Aren’t we here to give our ravenous readers insight onto that little piece of plastic sandwiched between the glossy liners and that other little piece of plastic? Most of the time I’d say yes, but in Madge’s case it’s almost impossible to separate the woman from the artist.

But wait, where’s the controversy been hiding? Two years after the colossal disaster that was the politically tainted American Life, and all we’ve got is a few children’s books, a religious buzz word, and these really weird elongated water bottles (some sort of euphemism for genitalia?) to show for it. Maybe, just maybe, she’s conceded that her capacity for shock value isn’t quite the ivory tower it once was. She’s a mother, she’s a wife, and she’s been in a Gap ad. The word "fifty" is likely scaring the shit out of her right about now. Dropping the Jesus Christ complex could turn out to be the smartest career move she’s ever made. There’s no question that it helped the music.

"Hung Up," the album’s opener and first single, vastly surpasses any preconceded notion on how good it should have been, grabbing the much talked about Abba sample and running it to new electro-bop heights. The five and a half minute introduction makes a bold statement about what’s to come. Pretense is (temporarily) unapparent. The lyrics ambiguous, vague, slightly nonsensical. This is a record for checkered floors and smoky ceilings, or is that not what neo-discos look like? Underage, wouldn’t know.

At this point I should probably point out that the majority of the album is produced by Stuart Price. Oh, "co-produced," sorry. "Get Together," the only track worth noting that Price didn’t have his hands in, turns throbbing kicks and fizzling synths into what’s easily the massive (albeit early) high point of the twelve songs that comprise Confessions. Two in, two down; "best work yet" oscillates at the tip of my tongue.

"Sorry" and "Future Lovers," while reeking of abysmal lyrical expositions, manage to pick up where their forerunners leave off and further the already incredibly obvious concept that more than anything this album is supposed to flow. But it’s right around here that things get distorted. The fifth track, "I Love New York," is probably music’s biggest occlusion of the year; pinching the momentum amassed by the album’s first four slots and scattering its pestilence over an almost unbearable four and a quarter minutes. But make no mistake, Price’s work on the decks is rarely better, but Madonna’s love song to her current city of choice is so bad it could sour even the best of beats. The words themselves shouldn’t be repeated without the presence of ironic sock puppets or crude cardboard cutouts. Get some of those ear plugs that filter out the highs and you might make out alright on the dance floor, but at home? The woman has never been a writer, but only now does her fluffy fiction begin to spoil and fester; the lyrics are mostly inconsequential for the better part of the first third of the record, but post-“I Love New York” it’s hard not to cover your face at some of the wretch that is Madonna’s big think pandering.

Oddly enough, the same lyrics that should be the first thing to forget about Confessions are actually the last thing I remember. The final seven songs resonate only for as long as their length permits. Despite the solid effort put up by "Push" and its vocal nod to "Like a Prayer," or the robot like tick of "How High" (which might as well be by Kylie Minogue), the second half stands as almost completely forgettable. It took about as long for Price to make the opening akin to current club trends as it did for him to make those very ideas passé in the end: recycling of already B class theories on dance music won’t take you very far in this scene.