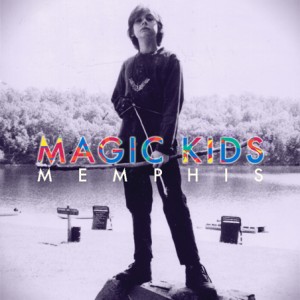 It seems worth reiterating, before I even begin to talk about Memphis, Magic Kids’ debut, that Brian Wilson was terrified of the ocean and had no interest whatsoever in surfing. It’s strange to me that this is a particular stance any contemporary songwriter might inhabit as part of their Beach Boys revivalism, but Bennett Foster, Magic Kids’ singer and frontman, chooses to do so. He and his band have crafted a record of tributes to geography likely no longer significant in the lives of actual teenagers, an arcane language that only exists to the band through fifties and early sixties pop culture. These are simple songs that, more than anything else, evoke Brian Wilson under Eugene Landy: the Beach Boys’ Love You (1977) seems the most apt reference point for this music, which eschews Wilson’s more sophisticated compositional techniques almost totally, leaving intact only hints at his melodies and those occasionally maddening lyrics.

Yet Memphis is a strikingly well-arranged record. Foster and keyboardist Will McElroy’s production flies in the face of most of their True Panther Sounds labelmates. They rely far less on contemporary techniques (burying everything in reverb, slowed-down samples, making everything sound broken) and instead cram a dozen instruments into two-minute pop songs, all of which come to the mix’s forefront when necessary. If anything, this most clearly evokes the sugar-rush, everything-thrown-against-the-wall-at-once approach of Los Campesinos!‘s debut, Hold On Now, Youngster… (2008), minus that band’s attempt to approximate complete and total emotional trainwrecks in its lyrics (which, depending on who you talk to, is either its best or its second-best quality). “Candy,” for example, gives room for its female backing vocals to float in at the end of every line, and its orchestration sits almost hidden underneath the rock band until its woodwinds quietly make themselves known. “Superball” has the same manic energy as Campesinos!‘s early work or the Apples in Stereo, with buzzy synths and string parts weaving in and out of each other to great effect. “Little Red Radio” makes room for Krautrock rhythms following gorgeous descending piano work. These songs are strikingly compact, and it’s a tribute to the band’s strengths that their assembly feels so natural.

The best of them all, “Summer,” is an unexpected triumph on an entire other level. It’s not sub-Brian Wilson so much as it’s worthy of Van Dyke Parks; Foster’s lyrics are still simple, but the swelling horns, film-score strings at the end of verses, theremin-like synthesizers, and its refusal to repeat ideas all make it praiseworthy. It even ends in a perfectly Parksian calypso breakdown, with voices singing “Don’t let summer find me alone again.” It’s a sentiment completely forgivable, one that doesn’t emerge immediately dated, and the kind of thing that justifies seeking out a record no matter how else it fails.

My problem with the rest of Memphis, then, is simple: it too often falls into retreading thoroughly explored pop without truly making it their own. The Explorer’s Club suffered similarly upon the release of their album Freedom Wind in 2008, which retreaded Brian Wilson’s existence while adding nothing; Magic Kids don’t quite do this, but Foster writes of his “steady girl,” his nostalgia for romance surrounding “Superball” and “Skateland” and “Sailing,” and how much he enjoys listening to his “Little Red Radio.” Rarely do we get a glimpse beyond this; when we do, like in “Summer,” which is as much about picking up college girls as it is anything else, it’s so refreshing that it’s hard not to be frustrated by Foster’s seeming unwillingness to develop something more interesting. Los Campesinos! are anomalous because they present discordant, abrasive orchestral pop and have a singer who can’t sing who uses that music to narrate the absolute horror and chaos that defines one’s late teens and early twenties with razorlike precision. Another potential point of reference is Beach House, who’ve remade girl group and early-sixties pop completely in their own image over a three-album run, simultaneously giving away their influences without ever parroting them. Magic Kids ought not to start sounding like either of those two bands, but were Foster to write about something—anything—with more heft than nostalgia for a place that he has likely only seen in other writers’ songs, they could use the astounding potential they demonstrate here to produce music that’s indispensably, uniquely theirs. While I’m frustrated by Memphis, I can only hope that they make good on everything they do right already.