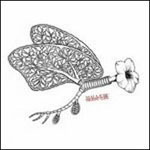 Canadian though I am, I have no idea how to speak French (contrary to what several Chicagoans seem to believe… and, seriously, Dom’s friends, Toronto is way hotter than Chi-town right now, so don’t act surprised that I own shorts). Even so, je parle la musique, and despite the language Montréal’s Malajube communicates plenty of ideas to me through ambitious vocal harmonies and intense arrangements. They’re that refreshing brand of indie pop that hinges delivery on psychosis, and though I suspect I’m about to state an unpopular opinion here, they’re kind of like the Unicorns that I like. I mean, I like the Unicorns, but I can never escape the fact that their particular brand of self-deprecating self-referentialism wasn’t really deprecating at all, so I never thought they had much of a sense of humor. Malajube sounds like what their other-lingual municipal cousins might have had they shed the onerous in-gag monotony and concentrated instead on the explosive, exuberant portion of their musical personality.

Taking that seed of ebullience and rolling it through about a million arrangement filters, Malajube have crafted a diverse album of ecstatic vocal hooks dripping in everything from post-punk to cookie-cutter pop. “Fille À Plumes” feints a post-rock opus before collapsing in giddy punk algorithms, the Animal Collective fronting Mission of Burma, at last. That’s kind of obvious name-dropping, I know, but when the coda swoops into a pop-prog outro, and the band seems to have barely flexed their muscles, you’ll understand exactly why this band is a reviewer’s dream. I could compare Malajube to just about anything and come out squeaky clean on the other side, since there’s a certain joyous spot-the-touchstone quality to this album (the monstrous power chords of “Le Crabe” = Foxtrot-era Genesis; the rickety intro to “Montréal -40°C” = A’s power pop; etc.) but it all basically dissolves into a clear example of how to A) write fucking phenomenal songs and B) produce the fucking hell out of them (with credit to Ryan Battistuzzi), without ever letting that production take attention away from how phenomenal they are. That’s a tough river to navigate, with so many crosscurrents to capsize you, but shit if we don’t get the added pleasure of hearing Malajube sound like they’re having the time of their lives nailing it.

Other bands have tried this soup-pot blend approach to genre, but the results are often bogged down in novelty humor (Ween) or sound like they were crafted off the Beck fake-book without any of the soul of Odelay or Midnite Vultures. Malajube skates across these problems by keeping their amps cranked and their enthusiasm on “high,” making this above all a straightforward rawk album, even if the band takes brief excursions down any path they come across. This is a missile of an album, no room to breathe, and even if “Casse-Cou” flips between goth-folk, metal, and ska, the band’s focus on mood and tension allows those discombobulated parts to make sense in context. Soaring high above the melee is Julien Mineau’s acrobatic voice, alternately soft and demure (as on the slippery opener “Jus De Canneberges”) and howling (as on the crunchy “Pâte Filo,” which melds surf guitars to a Ted Leo rhythm section).

“Monogamie” starts with a pretty little acoustic line and drummer Francis Mineau clacking away on his rims, before locking into a counter-intuitive step with bassist Mathieu Cournoyer. Julien and Renaud Bastien create dense thickets of guitar figures over top, until the whole thing collapses to an acoustic guitar, and Thomas Augustin sets up pulsing organs and throws his voice under the lead to work towards a triumphant end. With very little trickery, the amount of ground the song covers is fascinating, alternately quiet and coy and ecstatic. “Ton Plat Favori” pulls an Isaac Brock inflection and stretches it like canvas over an enragingly familiar piano riff (something for the Gem in Deadwood); Julien and his back-up vocalists square off, actually using the barroom melody as a launching pad for a series of clever vocal interplay. “La Russe” might be TTC in disguise; Julien’s almost-rap occurs only after feinting the cheesiest of techno intros.

The final songs on the album tend to play things less quirkily. “Étienne D’août” shows, like a million songs before it, exactly how Coldplay might be interesting if Coldplay wasn’t atrocious. The piano/guitar/high hat delivery is familiar, as is the jump between “soft” and “loud,” but Malajube places the track after several behemoths, allowing it to play warm nestable hands to its predecessors’ snarling monsters, and works a beautifully arranged string-section over top. The streaming vocal outro also doesn’t hurt; as the thing dissolves around Julien’s voice and his brother’s propulsive drums for the final stanza, the album gives up its ghosts. “St-Fortunat” may be the most complex song here from the perspective of composition; in delivery it shows just how strong Malajube are at taking complicated structures and framing them as delicious pop tunes. “La Fin” (that translates roughly to “The End”) is a rollicking piano and guitar duet that peters out after about a minute.

Malajube is up for the Polaris Award here in Canada. Aaron noted that they could just be “the token francophone entry,” but that obviously wasn’t the case. I’m surprised by how much better this is than some of the other entries (because I’ve never heard of it; not because the band is French). It’s certainly my favorite Canadian album so far this year. I told that to the clerk at Amoeba music in Berkeley yesterday when she said, “You’re from Canada? Lots of great bands coming from there!”

“Is it really cold there?”