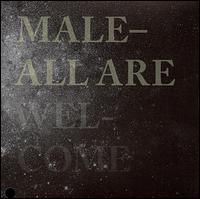 Male’s All Are Welcome is exactly the sum of its parts, having the episodic and non-committal feel of collaborative albums so interested in the circumstances of their own creation as to deter future iterations. Which is to say, neither a disappointment for those for whom the parts of the equation hold some appeal, nor transcendent of those parts either. Thoroughly couched in the writerly, inaccessible, and ultimately faint-hearted premise of studio improv, All Are Welcome meets its own standards but one wonders if only because they are lower than what they should be.

An occasionally fascinating and certainly grandiose dog’s breakfast, All Are Welcome features members of Exploding Star Orchestra, Pan American, and Joan of Arc, groups whose myriad collaborations can probably be fitted into a wall-sized constellation of flow charts. However cohesive the carte blanche minimalism and drone at work, that Todd Mattei is the guitarist of Joan of Arc and is playing on this album is at times as obvious as that Mike Reed of Exploding Star Orchestra is on percussion. Which is to say, the album is exactly as appealing as the extent to which these names mean anything to you.

Not that surprising, when you consider that the group’s central duo of Jonathan Krohn and Ben Mjolsness simply asked their friends, each a part of Chicago’s improv/avant-jazz scene, to show up and perform one-take additions to their largely textural work. The album’s four tracks present two central themes and set each on collision courses with the other—a blanket of swirling ambient noise and a declarative percussive outburst followed by major key builds. The effect is the sensation of ebbs and swells with largely arbitrary track breaks sure determined by more writerly considerations, like tape cuts and incidentals, than anything conforming to a traditional track listing. Skipping from the mid-point of “I’ll Be Standing Soon” to the mid-point of “Dark Advances” will not catapult one headlong into vastly new ideas but subtle elaborations on the same key. Not until the vibraphones (courtesy of Exploding Star Orchestra’s Jason Dasiewicz) of “Used To Be a Guy” does the group suggest an evolution of form out of the formless. It’s this general aesthetic consistency that makes the whole of All Are Welcome an ambient record rather than post-rock, avant-jazz, drone, or minimalism.

Which is also what ultimately makes the record a light and pleasing, if not lasting, listen. Where any thirty-second clip taken at random surely sounds like the spat-out results of an algorithm, the songs together don’t sound as fractured as they should, which is a feat. However, clocking in at less than 30 minutes and never quite convoluting the basis of the album’s two themes, even with the mild suggestion of songhood to “Used To Be a Guy,” All Are Welcome feels like an EP’s worth of rough sketches that treats itself as a curiosity for fans of the contributors. All the more disappointing: what’s here is certainly worthwhile, but that doesn’t direct movement towards the narrative elaboration, rebuttal, or resolution attempted by musicians willing to try a second time.