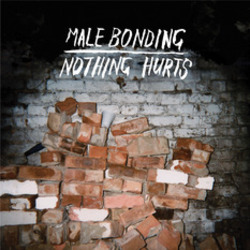 A few months ago, The New Yorker ran a feature about Vampire Weekend wherein the band was described discussing “the semiotics of preppy clothes,” reading Joan Didion on the tour bus, and doing a whole host of other things that suggested we should take them very seriously. At one point, Blink-182 frontman Tom DeLonge, of all people, made a cameo. He’s clearly brought into the article to act as a foil (one of the Vampire Weekend guys giggles when DeLonge shows them his new band’s cheesy music video; we’re expected to laugh too)—a big, dopey Falstaff set apart from the realm of “serious,” or worse yet, “cool” music. As someone who still gets very excited on the rare occasions when a band is able to do something fresh with pop-punk (though I don’t know that this has happened since 2006, when the Thermals’ The Body, The Blood, The Machine was released), I got a little defensive when I read this article. It made the prevailing cultural verdict on the genre stingingly clear: it’s tacky, it’s clownish, it’s unsalvageable, and any sincere embrace of it—no matter how creative or inspired—would be inherently tasteless. Male Bonding seem to share this point of view—which is a shame, because they are a pop-punk band.

Since it’s cloaked in that familiar lo-fi fuzz, most of what you read about the London band’s debut, Nothing Hurts, will tell you that it’s reminiscent of No Age’s Nouns (2008) or Times New Viking’s Rip It Off (2008)—but I am here to bestow upon it the well-intentioned compliment (and I do mean it as a compliment) that it has more in common with Blink 182’s Dude Ranch (1997) than any of those records. In fact, upon first hearing lead-off track “Years Not Long,” I was all but convinced that if I could pull my sleeve over my hand and wipe off the lo-fi grime like condensation off a windshield, I’d find that it actually was Mark Hoppus on lead vocals. Like the best pop-punk songs, there’s a youthful, anthemic quality to it—breakneck power chords; frenzied drumming; simple truths (“Ending this won’t make you strong / You won’t know what I have done”) hollered above the din. But even when, as on this song, Male Bonding crafts a catchy chorus or a memorable riff, they give off an air that they’re holding back, that they’re not quite content to let the songs speak for themselves.

Nothing Hurts ends up being its own worst enemy: it obscures its biggest strengths, choosing not to showcase them but to drown them out in a familiar and uninteresting haze. The almost-title-track, “Nothing Used to Hurt,” sums up this problem rather succinctly. Something about the churning bass and the reverb-y guitar riffs makes my heart all aflutter with pop-punk nostalgia done right. And if there’s one trademark of the genre that I’m an absolute sucker for, it’s the solo that is comprised of no more than four or five notes but is performed with a conviction and bravado on par with Hendrix playing the National Anthem (“Nothing Used to Hurt” has one of these). Unfortunately, “Nothing Used to Hurt” also has a minute of noise tacked on to the beginning, and it’s the worst kind of noise: utterly bland in texture and at loggerheads with the rest of the song’s energy. It even seeps over into the better parts of the song, flubbing an opportunity to make the drums pop and the guitars soar and keeping the song from transcending the trendy timestamp of its murky-on-purpose exterior.

The lo-fi craze is getting to that point where it’s being applied with such a wide brush that I think it’s actually starting to devalue the records on which it’s been done well. (I always feel the need to qualify my frustrations on this issue by saying that, on certain days, I would call Bee Thousand [1994] my favorite record of all time.) So I will remind you that the current wave of this thing began with the best intentions and a couple of very good records—Vivian Girls’ self-titled (2008), Japandroids’ Post-Nothing (2009) and, most recently, Surfer Blood’s Astro Coast (2010), to name a few. What makes those albums stand above the rest is that their production value seems like something that actually springs seamlessly from the songs themselves, not like an obligatory gloss of cool. We have reason to hope that things might not stay this way forever; maybe once the volcanic ash finally lifts and Europeans can once again do things like travel and breathe, it’ll be revealed that the lo-fi trend was just an unfortunate by-product of meteorology, and everyone will be left with clear skies and epistemological queasiness at the realization that what they’ve been listening to for the past year or so was actually not that different from pop-punk. And when this unlikely event goes down, I’ve still got my money on Hoppus having a thumb in Male Bonding’s pie.