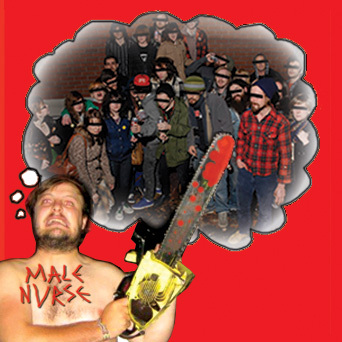 Male Nurse: My Friends Are All Assholes EP 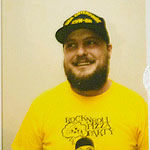 Though widespread binary thinking sets up every work of art or entertainment as either the noble realization of a Singular Artistic Vision or the more problematic siring of market-tested Product, there exist records for which neither sensibility seems a motivating factor. Some records just are; they’re made by friends, for friends, for no reason other than that making music is fun. They aren’t widely promoted or disseminated because, hell, if everyone you know already has a copy, why would you want to go out of your way to force it upon total strangers?

Ottawa’s Male Nurse, whose wonderful My Friends Are All Assholes EP was released on cassette earlier this year, produces thoroughly communal music. He writes simple, manageable material and performs it live, usually by himself but occasionally with friends, in coffee shops and gastropubs across the city. There’s an earnestness to this mentality and approach, quaint but not ironically or nostalgically so, that make his presence in the city genuinely special. Male Nurse is genial, intensely likable, and in his consistency of effort and boundlessness of heart, something close to great. He’s bereft of all buzz and hype, and so his existence here is resoundingly understated—he the opposite of a sensation, but sensationalism was never the point. This project is modest, but it’s executed beautifully.

Everything’s Amazing, No One’s Happy is the second cassette-oriented EP from Male Nurse’s Davey Quesnelle, and, like the previous outing, a digital copy of the record’s been released for free online. Cassette releases often carry with them the stigma of chic nostalgia, as though through deliberate regression an artist can oppose, as a gesture of hip credibility, the deterioration of the “pure” album by the tyranny of digitization (or, uh, something), but I get the sense that Quesnelle’s motivations are lot less loaded, and thus less irksome. Maybe it’s just that cassettes are a neat, cheap way of putting a physical version of this record out for those friends who want something tangible—there’s (presumably) no money to be made in it, it’s not getting blog-hyped and pre-ordered like limited Washed Out tapes, and it’s readily available to download if you just want to hear this shit anyway. Like the music itself, the option’s there for friends: it’s something simple and fun Quesnelle has made for the people he likes and the people who like him.

Though much about Male Nurse remains unchanged since Assholes, minor improvements abound. His folk-rock still has a kind of buoyant looseness and levity, but Quesnelle’s songwriting now tends to favor tightness over the rough, sketch-like qualities of his earlier work, and that, in conjunction with its noticeably higher production values, makes Everything’s Amazing feel more considered, accomplished, and professional. Or at least as professional as one can get in the company of close friends. This is still a predominantly social project, where song titles yet again read like social networks (this time it’s “Tim Ostler,” in which Quesnelle asks for forgiveness after calling Ostler a pussy) and, as on the uncharacteristically but refreshingly pop-oriented “No One’s Happy,” acquaintances drop by to flesh out rock songs with drum fills and vocal harmonies. It all sounds bigger, but the core is still the clique: this, as before, is an album by and for good friends. But that doesn’t mean we can’t hang around and enjoy it secondhand.