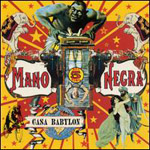 Back in 1980, The Clash released Sandanista. The year before they had put out London Callling. Absolutely nothing they could have done would have matched up to the unbelievable power of that album, so perhaps Sandanista was the right move; it’s certainly not a Great Album by any stretch of the imagination — it’s too unfocused and sprawling to ever really latch onto anything — but it, at the very least, an interesting step forward. Joe Strummer had discovered world music and punk could never quite be the same.

At some point in the ‘80s, Oscar Tramor, a talented young Spaniard living in Paris, became very aware of The Clash. He changed his name to Manuel Chao (later shortened to Manu Chao), and played for much of the early ‘80s in the rockabilly band Les Hot Pants. Upon their demise, Mano Negra was born, with an initial line-up of Chao, Santiago Cassariego, and Manu’s cousin Antonio Chao (aka Tonyo del Borneo).

Mano Negra was Sandanista come to life. The band was scattershot, bursting with creativity, and totally unpredictable. Their first hit --- the absolutely magnificent, criminally-overlooked-in-America “Mala Vida” --- led to a record deal and their first album, Patchanka, which was released in 1988. The 1989 follow-up, Puta’s Fever, is considered by many to be their finest album. They spent the first few years of the ‘90s courting US and UK audiences, with both the Amerika Perdida compilation and with the crazed King of Bongo (1991).

After it became clear that Mano Negra were never really going to be a crossover success, the band took a new approach. In 1992, with the support of the French government, the band managed to convert a ship into a performance venue and launched the Cargo Tour, for which they cruised around Central and South America performing shows in port cities. The influence of this tour is almost undeniable when approaching the band’s final album, the significant departure that is Casa Babylon.

In some ways, Casa Babylon is really the first Manu Chao solo album. The rest of the band was still there (and they still largely are, just now in the form of The Radio Bemba Sound System), but something had clearly changed in the formula. First, the songs are more overtly political, whereas much of the earlier material was either just goofy punk or overgrown love songs. Second, Casa Babylon signaled the beginning of the use of samples for Chao, a process that was highlighted on his first solo record, Clandestino, and brought to its logical conclusion with “Infinita Tristeza,” the incredible closer of Proxima Estacion: Esperanza. Third, the band sticks mostly to Spanish here, and incorporate more of the dub and afro-latin elements that they’d been brought into contact with on the world tour.

Still, Casa Babylon maintains the energy of the earlier Mano Negra albums, capturing the force of the live show in a way that none of the Chao solo albums have even attempted. Opener “Viva Zapata” is a huge blast of punk rock, but drenched in samples of speeches and chants, followed up with the more traditionally Mano Negra title track. It’s “The Monkey” and “Senor Matanza” that really show that times have changed. Riding over a hip-hop beat, Chao raps the parable of “The Monkey,” dropping back on blasts of rock for the chorus. The dub-heavy “Senor Matanza” is more in line with Clandestino-era Chao, but with a funk and clear Latin American influence that doesn’t come through quite as well in his solo work.

Anyone familiar with Chao’s solo work will recognize certain references here, and “Super Chango” is sure to be one of them. The song itself is a blissed-out little gem of soulful punk rock that introduces one of Chao’s recurring characters, the titular Super Chango. They follow it up with “Bala Perdida,” a huge up-tempo rocker on the entire other end of the spectrum, only to chase it with “Machine Gun,” perhaps their best song since “Mala Vida.” “Machine Gun” bops along over a quick dub beat, managing to be both overtly political (it deals with western imperialism and militarism), and also stand as one of their most beautiful songs.

The second half of the album tends to lag a bit, as the schizophrenic appropriation of styles begins to wear thin. The children’s chorus of “El Alakran” is a bit too precious, and the heavy dub of “Drives me Crazy” doesn’t do much to set itself apart. Still, there are a few brilliant moments: “Mama Perfecta” could sit perfectly on Proxima Estacion: Esperanza, “Love and Hate” should have been the song to break the band in America, and “Hamburger Fields” is a great jab at consumerism. The two bonus tracks are telling when looking at Chao’s progress post-Mano Negra; lyrically, “Sueno de Solentiname” is simple, more concerned with tone and atmosphere (a Chao trademark), and “This is My World” relies on clever sampling and subtle political statements.

Listening to it now, most of the Mano Negra discography sounds dated. Manu Chao’s excellent 2002 live album features a number of Mano Negra’s best songs in revitalized form, and it makes these original versions sound all the more tinny and poorly-produced. The live take of “Machine Gun” puts the version here to shame, “King Kong Five” is explosive, and even “Mala Vida” benefits from a slight shortening and a significant speeding up.

Still, of all the Mano Negra albums, Casa Babylon has fared the best, most likely because it was simply ahead of its time. Chao had been receptive to the music throughout Latin America, and as he merged that with elements of the growing world rap movement (MC Solaar’s Prose Combat came out in ’94 as well), something entirely new and forward-thinking was born. Casa Babylon may not be a "Great Album," but it was an important step forward, especially seen in the context of Chao’s later career as a Bob Marley-channeling minstrel and leftist folk hero. If Mano Negra really were Sandanista come to life, then Casa Babylon is the band at it’s most focused and creative. It’s still crazed and all over the place, but it’s also an album that seeks to move punk forward and refuses to be fenced in by anything that has come before.