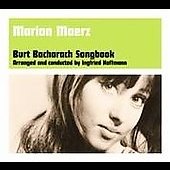 For every pop singer who achieves celebrity status, there are dozens whose budding music careers tank before their fame fully blossoms. It’s a story so common that the list of names could go on forever, if only we hadn’t forgotten them all. In Germany forty years ago, that’s what happened to the sprightly young pop singer Marion Maerz (who, it’s worth noting, had a comeback in the ’90s and emerged again in the ’00s). Burt Bacharach Songbook was supposed to revivify her career, a sign of her refinement and maturity, but it ended up a commercial failure. Now that 38 long years have passed, the record is getting another chance. Largely forgotten except by collectors, emblematic of so many grand ambitions and ill-fated dreams, Burt Bacharach Songbook might finally win Maerz the recognition she never received back in the ’70s. But it seems more likely that these stale arrangements will fall into obscurity once more.

Putting on Burt Bacharach Songbook feels like opening a time capsule and peering into the ephemeral pleasures of another age, one that bears a striking resemblance to today. Maerz practically lived the short life of an American B-level pop star, getting a spot on a Pepsi-sponsored talent show as she studied to be a secretary, losing the contest but winning a contract with Polydor, shooting to the top of the charts with her first single, “Er Ist Weider Da,” and then steadily falling out of fashion over the next decade or so. Coming in the twilight of her fame, Burt Bacharach Songbook feels strangely anachronistic. Maerz’s bright voice, reciting Bacharach lyrics in German with subdued rolling Rs, exudes a teeny-bopper’s coy innocence. On the other hand, Ingfried Hoffmann’s stale band-orchestra ensemble arrangements—with its grooveless rhythm section, mock-triumphant horns and hyper-dramatic strings—are fit for a washed-up celebrity living out their last years in a Las Vegas amphitheater. This is supposed to be Maerz’s prime, but it sounds like she has already passed it—without having grown up in the first place.

With the recession in full swing, this re-release couldn’t have come at a worse time. Burt Bacharach Songbook faces a tough American audience—so many of them reared, no less, on the laws of fame that spelled Maerz’s demise forty years ago and that, on American shores, are now explicitly enforced on American Idol. Burt Bacharach Songbook probably won’t pass the muster of the disagreeable Simon, or win nearly as many sales as Taylor Hicks’ next record, but it still deserves a second round. If anything, it can assure all those who failed to make the cut that even the obscurest stars have their day. (For all I know, Maerz has a cult following that has been waiting on this re-release for decades.) Only time will tell how successful Burt Bacharach Songbook will be this time around, but one thing is certain: even if it languishes, it’s not disappearing any time soon if it goes up for sale online.