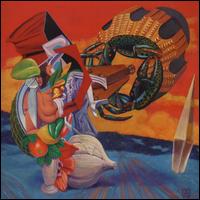 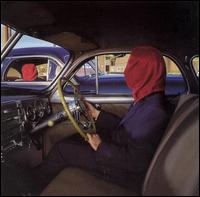 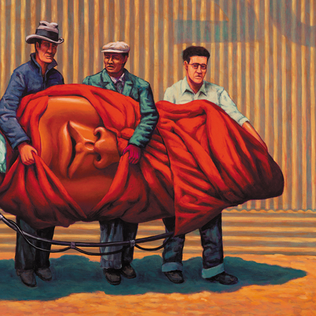 In the late 1980s, when the “tiger economies” in Japan started to really ramp up, there was a nouveau-riche class that reached levels of opulence rarely seen in the modern civilized world. I heard a story once that certain restaurants provided gold flakes as a condiment — not as a garnish, but right there in a shaker on the table. When the stock market slowdown of the early ‘90s arrived, this story, though probably apocryphal, became a cautionary tale in the West about the dangers of splurge spending. I bring this up because we live in an unstable time where both a terrorist attack and the obligatory Oliver Stone film rendition of it can wreak havoc, and when the bubble bursts again, when the market turns bearish as buyer confidence wanes, people will stand together in tight clumps and, in hushed, admonitory tones, say the following: “You guys remember Mars Volta’s Amputechture? What the fuck was that?”

Okay. Perhaps I am overstating my case a bit. Maybe a reeling world won’t look to the Mars Volta when they bemoan the indulgent nature of the post-9/11, pre-T/B/A era. However, the indulgence exhibited in this eight-track, 78 minute opus is every bit as ridiculous as sprinkling gold flakes on your meatloaf. This is glam rock for the post-modernists. Whereas glam could venerate image over substance to the point where sheer vacuity was virtue, the Mars Volta indulge in nihilistic experimentation without regard for the people for whom they are ostensibly making the music. The world is chaos. Society is fiction. Track lengths are in your mind. Your money and time are illusions, so when you spend both on this record you won’t be “wasting” them so much as you just won’t have them anymore, and we’ll have given you something equally valuable: horseshit.

To wit: the record opens with “Vicarious Atonement,” which itself opens with two and a half minutes of overly able Frusciante noodling that sounds like a Guitar Hero™ version of Santana. The entirety of this seven-plus minute track is, in fact, mere preamble to “Tetragrammaton,” which is as behemoth as its name suggests at just under seventeen minutes. Few are the bands whose sound has the requisite tensile strength to stretch a song for seventeen minutes; the Mars Volta isn’t one of them. Those that attempt such needless elongation usually fail for one of two reasons: repetition or disjointedness.

The Mars Volta opt conclusively for the latter: “Tetragrammaton” is at least three different songs separated by brackish moats of instrumental confusion. In a turn that is both wonderfully convenient and symmetric, I have three serious problems with this:

1) This is not the only song like this on the album. There are three tracks on this album over eleven minutes long, and each suffers from the same unwieldiness exemplified in “Tetragrammaton.”

2) None of the three embedded songs in “Tetragammaton” are particularly good. This stems partly from the fact that each of them by itself is too long and laden with periodic aimless freak-outs.

3) Somewhere, partially digested in the belly of this monstrosity, are the makings of an excellent three-minute jam. When Bixler-Zavala belts the refrain, “In the end they just gag me to make you come out,” it doesn’t make any sense, but it feels for a second like ATDI nonsense, like the kind of nonsense you can get behind.

And it’s the unrealized potential cruelly flaunted in such flare-ups that really sucks. Not only have MV released a shit record, but they’ve cheated us out of the great record that they could have made. “Vermicide,” as the album’s only track under five minutes, is an alright song, with it’s neat little singer/guitar syncopation in the chorus, and it mercifully leaves this merit untarnished by any maraca pyrotechnic horseshit. “Viscera Eyes,” though, is a legitimate burner with a fist-in-the-air guitar line providing the focal point of which almost every other track is disastrously bereft. Bixler-Zavala does that thing where he uses a lava lamp and a swatch of plum-colored shag carpet to channel Steve Perry over a horn-orgy and for a moment it kinda sounds like a Bond theme, but like a hard-ass Bond where the soft-core porn is just a tad harder and we get to see a wicked headkill or two. I also realized while listening to this song that I understand Cedric’s lyrics better when he sings, as he does through most of this song, in Spanish. In fact, my one major reservation about “Viscera Eyes” is that (and see if you can guess what I’m about to say) it’s nine and a half minutes long and sputters out with nearly two minutes of half-assed post-coital instrumentals.

Even so, these are the points on this record where it becomes apparent that The Mars Volta are actually too musically talented to make an entirely worthless album, even when they try their best. And make no mistake, they are trying. The listening experience of a Volta record is a dogfight that pits the two musicians responsible for the unmitigated ferocity of Relationship of Command against the morbidly obese hydra of their own inscrutable ambition. Through the three-album run of this battle so far, the ass-whompings delivered by the latter have been progressively severe.

Even if one were to view this album as a cohesive unit, making track lengths arbitrary (it lacks the fluidity and legible sequential progression necessary to do this, but whatever), it’s still maddeningly diffuse at best, and an engorged sonic clusterfuck at worst. Unfortunately, most of Amputechture can be found twitching manically somewhere on that spectrum. At the end of his review of Frances the Mute, Matt Stephens talks about the wankery of that work being a “horrifying, beastly thing” about which Bixler-Zavala himself issues warning in the ATDI song “Arcarsenal.” In Amputechture that beast takes another lumbering step into the light, where we can see it clearly as it uses the bones of the prophetic singer to pick the gold flakes from its teeth.