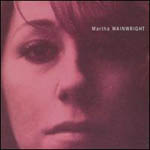 In the constant string of talented, attractive female singer-songwriters, Martha Wainwright has a leg up right from the start. She is indeed the daughter of Loudon and Kate, making her the sister of Rufus and, by all rights, due a fair deal of attention. Fortunately, Martha really deserves it. Nothing on her self-titled debut full-length is "genius" or "brilliant," but the material is consistently well written and occasionally very good.

Since dropping a self-titled EP six years ago, Wainwright has been silent, returning earlier this year with the Bloody Motherfucking Asshole EP. The EP grabbed my attention not only because of its vulgar title but also its impressive and consistent quality. The title track of the EP, a slightly longer version of which is included here, is nothing short of fantastic; Wainwright’s stripped down to an acoustic guitar, and she belts out her lines with her voice a bit more ragged and certainly more sincere than it is on any of the other songs on the EP (or the LP). Two of the EP songs made the cut, but it’s a shame that the Lucinda Williams-ish “It’s Over” and the lovely, sparse “I Will Internalize” didn’t make it onto the proper album.

Still, I have relatively few bones to pick as far as song choices and sequencing go. Opener “Far Away” lets Wainwright show off her pipes, while the more interesting, uptempo “G.P.T.” and “Factory” set her up as a versatile, creative singer and writer with tinges of fellow Canadians Sarah Slean and, uh, Chantal Kreviazuk. “G.P.T.” is a hold-over from her first EP, and it has an energy that much of the rest of the album lacks. “This Life,” the longest track on the album, has a beautifully anthemic feel, while “The Maker,” featuring Rufus on backing vocals, best shows off the instrumental capacity of her band. Closer “Whither Must I Wander” again shows Wainwright’s range, and the sparse piano backing fits the song well.

It’s not all rosy, of course. The slower numbers tend toward homogeneity, especially “These Flowers,” “TV Show,” and the bland “Who Was I Kidding?” Likewise, “Ball & Chain” fails to connect, and the shock factor ("She's getting a degree in fucking you") just isn’t that effective. Generally, though, once you get past the weakness and clichés of some of the instrumentals (see especially the out-of-place sax line on “Who Was I Kidding?”), Wainwright proves herself an impressive songwriter. Her lyrics hint at something deeper and darker going on under the surface, but they’re restrained enough to keep it interesting, always a significant feat for a budding musician.

At this point it seems that the family legacy is safe. On the family scale Martha clearly falls closest to her mother, avoiding the parody of her father and the orchestral grandiosity of her brother, but nailing the sincere folk feel of McGarrigle. Let’s hope she can keep it up and find a band that can match her ambitions.