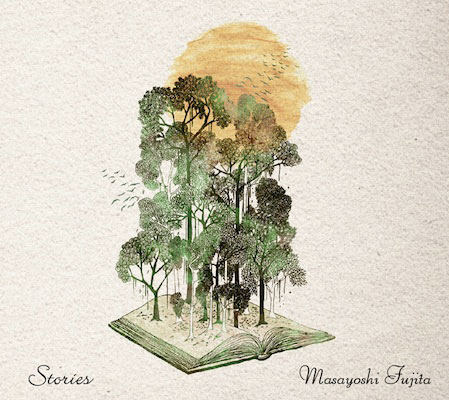 Instead of speaking about Berlin-based Masayoshi Fujita’s boringly-titled-but-beautifully-performed Stories in isolation, I’m going to compare it to Spencer Krug’s Moonface album, Dreamland EP: Marimba and Shit-Drums (2010). This is problematic for a couple of reasons. First, Stories is an album of solo vibraphone compositions, while Marimba and Shit-Drums is the ball-park-similar-but-really-kinda-different-marimba with drums that sound like shit. (Notice the hyphen in the title; maybe the drums are made out of actual shit.) Second, I’m mashing together classically trained and indie rock figures so fast it would make a Rachel’s fan’s head spin. Stories is probably better compared to something like a Modern Jazz Quartet recording or some canonical vibraphone performance that all vibraphone students are required to study in vibraphone school. You know the one.

But the comparison to Krug is useful for the simple fact that both records strip away accompaniment, leaving the artist exposed, naked, without recourse to blame a faulty monitor or a stoned guitar player or a terrible production job. Both records are prime examples of when an artist without a crutch turns out a virtuoso performance of writerly innovation. What these records should both be are niche, but what they convey is an ear for propulsive and dynamic arrangements, a voice that will speak to fans of indie instrumental. One might think that solo performances are antiseptic and overly technical, but Fujita takes the listener through each movement with delicacy and patience, building and ebbing, weaving melodies together in ways that, like the best pop songs, sound totally natural and yet fresh and sentimental.

…which isn’t to say that there isn’t something there for the lover of the boldly technical performance. Watch this video to see just how complex vibraphone performance can be:

Where many instruments force the performer to construct notes and chords between their left and right hands and sometimes their left and right feet, the vibraphone introduces another plane of complexity with each hand holding two mallets, providing what is essentially five appendages (including the foot on the sustain pedal). Performers are forced to be multi-linear, like pianists, which elevates the instrument from simply percussive to fully capable to supporting the multifaceted compositions or a writer like Fujita. Not to nerd out too much here, but if you treat solo vibraphone recordings as a sub-sub-genre unto itself, then Stories is the kind of record that opens doors to this genre for fans of indie, post-rock, and neo-classical while also being very nice to listen to entirely on its own terms.

The melodies and structural reliability on display here provide such accessibility that one could imagine these songs expanded to include additional instruments, vocals, and atmospherics—expanded to become the much more conventional indie pop album to which we’re accustomed. But Fujita’s masterful playing provides all of the nuance we require. I don’t know if Stories is a special album or if there’s a community of vibraphone composers out there scoffing at Fujita derivativeness. But, as with Krug’s Moonface recordings, this ambient/indie/electronic fan’s ears hear something familiar, stripped of artifice, and remarkably listenable.