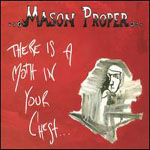 There's A Moth In Your Chest

Whatever else will be said about Mason Proper's There's a Moth in Your Chest in this review, it is an enjoyable album. This means that it is capable of being broken down into its component parts and analyzed just like any other album, but I don't feel like that is the most worthwhile approach in this particular case. This album seems better approached in its totality, with an eye towards its ultimate goals and context. And yes, I've read enough blog polemics to know that this tack isn't universally approved of. So let's split the difference, shall we?

I could say, for example:

A skittery beat sets the stage for roving synth chimes and buttoned-down guitar licks in "A Chance Encounter." Layered male and female vocals roll along the surface of the track, buoyed by the melody. "100 Years" and "Mr. Charm" approximate Brit-pop with varied success. The former manages an inviting swing on the strength of its buzzy guitars drenched in cymbal splash, despite being fully a minute-and-a-half too long. The latter aims at some of Blur's sillier shout-chorus moments ("We've Got a File On You") but falls well short of its mark without the benefit of Albarn's ear for rousing riffs.

"Intimidation" and "The World is Smaller Than You Think" are what may have passed as second generation garage rock in the decade immediately previous to this one. Of course we all know now that this is just a euphemism for finished-basement-rock, and we, who made questionable use of our own finished basements now permit ourselves to shudder at such an adolescent lack of urbanity. Honestly, this record isn't making any year-end lists. By the same token it's probably high enough above average to warrant a listen or two if you come happen to come across it casually.

I suspect that this approach would yield a tolerably readable review, but there is more to be said about this band and those that share their bandwidth. Indulge me through three points that, while intimately related to the character of this music, do not deal directly with how "good" or "bad" the album is, objectively speaking.

Mason Proper is more than radio friendly: these songs fairly begged to be given a wide audience which inevitably bodes well commercially, but can be dubious praise when viewed through a, dare I say, artistic lens.

First, and perhaps most interestingly, the accessibility of these songs doesn't seem to be a function of a band that has reluctantly diluted its message. No, these songs were written diluted, born as fully formed soft balls to be lobbed in a rainbow arc over the palette of the listener. There's not a lot of interpretation necessary to appreciate any particular track, and the semi-lucid lyrics usually pogo amiably along with whatever chord progression the band has chosen to unfurl. This prompts the question: if the only goal you've ever had is to sell records, are you a sellout?

Second, and perhaps most admirably, these aren't idiotically simple songs. Moth demonstrates elasticity and range without ever really challenging one to put the pieces together. The songs don't hang together, but then when the hell did Mason Proper promise you that the songs were going to hang together? Don't look for cohesion here; that would be like trying to figure out how Criss Angel read Sugar Ray's Mark McGrath's mind -- it'll ruin the fun. Yet most of these tracks have just enough of a sense of themselves to stand on their own two dancing feet (even when that sense-of-self is, "I'm a decent ripoff"). This is not, of course, to say that there isn't a fair dappling of moments here that invite the ol' double arrow forward.

Third, and perhaps most damagingly, the fact that these songs would fit so perfectly in mid-afternoon Top 40 radio sets means, by process of frigid, cruel deductive reasoning, there are myriad contexts in which this music does not beg to be played. I'm not implying that all radio hits are confined to that narrow medium. That would be a silly implication, and I would justly receive much well-reasoned hate mail for making it. I am saying, though, that Mason Proper fits in the class of straight-forward, raucous feel good-ery that perfectly accents a commute with the windows down and is of little use anywhere else.

You're not throwing this on at a party if you're over the age of 16, God help the student that tries to study or write to it, and the musically motivated running enthusiast would find himself skipping half of the time (still probably good cardio), and the other half getting hit by a car (decidedly antithetical to the exercise process). All of the foregoing being asserted, I'd be lying if I said that I wouldn't be glad to hear "100 Years" on my drive home after a long day of class.

So in the final analysis There's a Moth in Your Chest serves a very important musical purpose: namely, helping (prospectively) to drag mainstream radio up one inch at a time in its near-impossible climb toward the summit of listenability. It's my opinion that such efforts are to be encouraged. I will cling with shameless abandon to anything that stands as a bulwark in a slot that would have otherwise been occupied by Akon. Any questions?

Q: "But, Eric, aren't you essentially saying that you like this record because it could have been worse?"