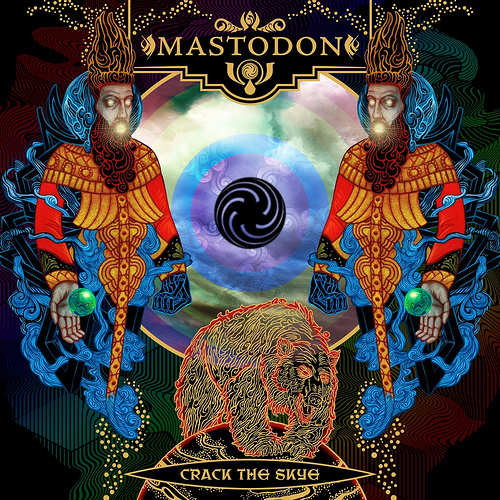 I’m only going to obliquely deal with this as a metal album; doing otherwise would require pretending that I have an extensive knowledge of the genre, which… I don’t. Anyone looking for an account of how Blood Mountain furthers Mastodon’s steady conquest of metalhead’s hearts after the behemoth Leviathan stormed into our consciousness in 2004 should look elsewhere. Of course, that’s a disclaimer that should only discredit my opinion to a point; Blood Mountain rocks, and I don’t need to understand the complete history of metal from Heavy (1968) or Sad Wings of Destiny (1976) to the present to draw that conclusion, especially since these four musicians are dipping their fingers into vats of hardcore and prog as much as metal proper.

Mastodon are that kind of band—thickly wound into the historical and thematic processes of their genre while simultaneously opening up their music to the influence of related (and some non-related) groups. I think the shock here is that they don’t sacrifice to do so; I mean, sure, the music of Blood Mountain is probably a little more accessible than some of your more obscure and romantic metal groups, but “more accessible” doesn’t have to mean “accessible,” and Mastodon’s biggest strength doesn’t lie in their ability to craft metal songs that are somehow dumbed (or slowed) down for the plebes like me in the audience, but rather their ability to craft songs period. Aside from the lyrical content—which is unabashedly schlocky and covers that well-worn metal theme of the individual against nature—the band knows how to write and record a killer track.

More importantly, Blood Mountain is another step forward. Where Leviathan charmed with its adaptation of the whale tale by stretching narratives across a decaying canvas of exploding supernova guitar riffs (making it the thinking person’s Mastodon flavor), Blood Mountain maintains the swinging-fists fury of its predecessor’s brilliant opening “Blood & Thunder” moments for an entire album. In other words, the essential thematic space of Leviathan—that sense of being drowned in an endlessly metamorphic fluid—is here replaced with sure-footed and brutal shifts in tempo, signature, and tone. Which makes sense, if you know the concept: somebody is trying to carry a crystal to the top of a mountain, but along the way is beset by hunger, fatigue, and monsters; she gets lost, or stumbles, or is convinced to eat her own flesh by the lead singer of Mars Volta. In the loose Microphones-esque panorama of Mastodon where Remission (2002) stood for fire and Leviathan took on water, Blood Mountain treats the earth as only the solid anchor upon which avalanches, decay, and the beasts of the wilderness can be explored.

A lot of this has to do with Bränn Dailor, who replaces “Blood & Thunder”’s biotic guitar riff with “The Wolf is Loose”’s gravel-pit drum rolls. Dailor is one of those occasional candidates for the title of “greatest drummer ever” (a category which generally ignores out and jazz or anything not featuring a guitar), but he often lives up to that sort of hyperbole. The song squirrels upwards, guitar riffs springing off tree branches and odd signatures colliding against one another. It’s hard to parse the exact story from the lyrics, being as they’re more about fortitude and referring to the main character as “the hero of the gods” than they are about lived experience, but the singing is wonderful, Troy Sanders and Brent Hinds swapping mic space to scream or intone while covering a whole spectrum of emotional moods between them. The two tracks that follow “Wolf” expand these attributes; “Sleeping Giant” has Hinds and Bill Kelliher wrapping serpentine guitars around the drippiest song in the band’s catalogue while “Crystal Skull” gives Dailor and Sanders (bass) room to trick out the bottom end with one of those grizzly multi-limbed attacks that causes you to suck air between your teeth.

In fact, most of the songs show the band in top form. The only real atrocity here is “Bladecatcher,” a directionless prog jam featuring ludicrous turntable stabs and sound effects. If they were trying to go for Mr. Bungle, they should have gone for Mr. Bungle, and not this halfway point where the pieces are layered but not spastic enough to hide how basic and kind of silly they are. In other words, a prog riff (or a metal riff) is just a regular riff played faster; it still needs to go somewhere (see “Capillarian Crest” where a lot of the individual riffs are actually kind of grating, but the fantastic way the band pieces them together makes the song thrilling). “Circle of Cysquatch” runs at triple speed while Dailor still teases nimble jazz riffs into the mix; the duel guitar work is incredibly impressive, flopping between prog workouts, high-note scribbles, and throaty string-bends on the low end. Joshua Hommes guests on “Colony of Birchmen,” a delicious swat of palm-cut guitar chords and Dailor missing the memo about keeping the between-chords space silent. The middle of the song is one of Mastodon’s finer instrumental/vocal sequences, and the band runs though the “21st Century Schizoid Man” fake book while simultaneously evoking Alice in Chains.

“Hunters of the Sky” starts slow before cranking out the grease guitar, employing the most obvious metal riffs on the album, but employing them well. “Hand of Stone” continues to control the spasms, showing deft interplay between the three guitarists and keeping Dailor (relatively, anyway) in check. The mood and tone of “Hand” is altered not so much through intensity as it is through chord progressions and riffage, which is a neat trick but hard to accomplish. “This Mortal Soil” contains the coolest guitar intro of the year, one of those riffs that makes you wish metal guitarists didn’t need to get heavy. The song proper is also good, scaly riffs diving through panned channels, and even a little bit of Adrian Belew in the vocals to match the Discipline-era (1981) sound of the interplay. “Siberian Divide,” where our hero eats his own flesh, is the ultimate conundrum. Our hero eventually chooses to continue, rather than succumb to fatigue or cold, and the crystal, placed upon the summit, apparently melts the ice. Gnawing on your arm will do that for you.

Plying prog, metal, and hardcore together may not seem like a radical idea, but Mastodon may be the only young band able to do it so competently or radically. These guys are fantastic musicians, which keeps their ideas from being half-baked (excepting “Bladecatcher,” which, seriously, why dudes?). This isn’t a beast of an album like Leviathan was; its songs are more indenifiably formed, because this mountain (unlike that sea) contains a myriad of obstacles, and whether Cyclops, giants, or Snow Queens, Mastodon is able to capture the way those encounters might sound: the stress and rage and courage and fear of being on the run.