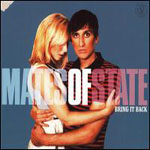 It’s always been easy to just talk about the Mates as mates, to focus on the precious, youthful sense of True Love that dripped from the jewel case. That’s exactly what I’d be writing about now, if only this album didn't falter so badly in its attempt to exude adulthood and maturity, something Kori Gardner and Jason Hammel blissfully managed to avoid for their first three albums. Mates of State have always been all Skittles and stomach aches, but their creative vocal arrangements and mouth-watering hooks made the music go down easy, even if it also made you harbor some secret hatred for their perfect union. Those first albums, especially Team Boo, seemed to borrow from all of my favorite boy-girl groups. They had the quirkiness of the B-52's, the flair of the Sugarcubes, and the melodic sense of the Carpenters. Their vocal arrangements were chaotic, real-time entanglements that avoided the call-and-response and he said/she said clichés of the pop duet. They were guitarless and fancy-free, and their vocal presence made the occasional in-joke lyrics palatable.

Then they grew up. Bring it Back is "the group evolving" (or something), which pretty much just means that their sound is bigger. Rather than the simple three-part-appeal that marked earlier albums (vocals, drums, and keys), the production here makes them sound like they are fronting a bona fide rock and roll band. This is a bad thing: this new complexity undermines their giddy, naïve appeal, and it drowns the vocals, making them street-corner shouts instead of the boisterous, heartfelt conversations they once were. The extra frills and heavy polish strive to give the album an anthemic feel, but, with the exception of “Running Out,” all the flair is ineffective to this end.

Rather than two and three minute flavor bursts, the Mates make us marinate on no less than four tracks longer than 4:30 — veritable epics by Mates standards, the four longest tracks in their discography to date. The last track, for example, ends with a drawling incantation of the mantra, "I'm tired of singing,” that lasts longer than most of the other songs on the album. Either I’m missing something, or this is just a very unfunny joke. The most flagrant and terrible example of all this "maturity" business is the last 10 seconds of "Nature and the Wreck," which literally made me cringe. An otherwise poignant two minute tribute to a child closes with actual baby noises. Straight from the bedside monitor to the studio, this super-literal sound effect seems clumsy, if not downright ridiculous. It cheapens one of Kori's most emotionally moving vocal performances. Sing about the baby, don't dangle him from the balcony for Christ's sake.

In a few instances, the Mates’ newfound sophistication suits them. "For the Actor" has the album's standout chorus, and the music nicely reflects the refrain of being "on a fantasy." "Fraud in the 80's" maximizes the nod to that glorious decade with just the right blend of synth, sass and handclaps. These songs are among the best that the band has recorded, still exuding the breezy jubilance that made them famous but with a slightly updated aesthetic. It’s too little, though — indie’s favorite couple is now in bed by nine, tired of singing and paying for babysitters. While still containing some of the cavity-inducing goodness that dominated their earlier work, Bring it Back proves that the honeymoon is over.