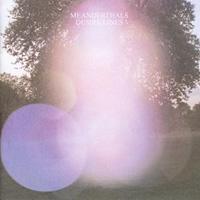 The result of an impromptu jam session, Meanderthals sound like a breezy, non-committal project that, on the one hand, is impressive for the way a seemingly tossed-off album still possesses a mechanical quality and, on the other, a bit gutlessly sidesteps the unmerciful attentions of rigorous criticism for the way it innocuously appears, insists that it not be taken seriously, and remains unrelentingly relaxed.

And this album reaches novocaine depths of relaxation. The obvious comparisons here are Studio and Quiet Village and so, I suppose, Meanderthals fall into that easily compiled category of “chill-out music.” They do possess the same qualities of every single band in that genre, including their supernaturally effective way of instantly and uncomplicatedly connecting with any and every listener’s pleasure centers, sort of the Carnival Cruise to Jamaica of jam band electronica. They chug along at mid-tempo, sending washes of reverb and synth and the bass is repetitive, sleep-inducing surf, and it’s all so much whale song and relaxation and Zen that you could probably randomly mix all of the genre’s bands together and still end up with a quintessentially 60%-rating record. And that’s the thing: I enjoy chill-out music, but I enjoy it exactly the same amount as everyone else does. I’m not offended, or bored, or challenged, or inspired. Chill-out is just unobtrusively there, never insisting that you do anything other than, well, chill out. That it’s cross demographic is both made entirely possible because of its lack of demands on the listener and a shame because it simultaneously suggests and affirms the worst about listeners: that we don’t want to think about our music, we want it to distract and relax us. Chill-out is a static genre, the upper-middle class of electronica, thoroughly comfortable in both the headphones of the world’s most existentially troubled kid and blasting over the speakers of your local clothing boutique. I’m forced to conclude that chill-out revisits adult contemporary for a generation that refuses to let go of its urban youth.

Attempting to distinguish between the songs seems entirely beside the point as the album is obviously designed to be listened to as one ceaselessly relaxing wave, probably while high, possibly while waxing philosophical about how the world would be a better place if we all just learned to take it easy. It’s got samples of bongos and guitars with reverb and seems cool—not actually cool, but Miami Vice cool, as in a calculatedly, “This is what network television thinks is cool” sort of cool. “Lasaron Highway” has a 4/4 beat somewhere there in the background, the first real attempt at what you might, in a sluggish haze, call a “driving” tempo. But it’s also the equivalent of a skipping record, hypnotically drowning the listener into a state of drooling placation. They should play this record over loudspeakers to suppress riots.

You won’t hate this record; you won’t be any more capable of hating this record as you would a particularly aesthetically pleasing houseplant. But the record’s greatest achievement is that it’s happy with just not being hated. Its self-legitimizing, all-encompassing answer to all of life’s questions—“chill out”—is itself the answer to the question of why this album didn’t bother to be any more than it is. Don’t sweat it; it’s just music. Just don’t operate heavy equipment while listening to it.