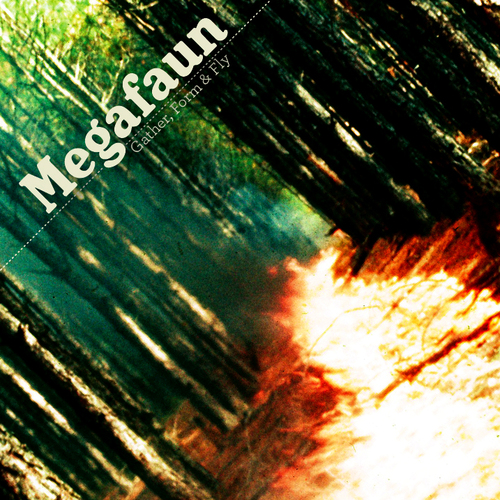 Understand this about what you will read here: I am going to be mostly complaining about a record I actually like. This is because Megafaun’s failures are more interesting than their successes, which include, first and foremost, a most unlikely blend of Appalachian folk and musique concrète. What jumps out at first, predictably, are the more straight-ahead folk tracks like “The Fade,” “Kaufman’s Ballad,” and “Guns” (before it gets all nutty after the first two and a half minutes anyway). These are the tracks you send out as advanced downloads, that you stream on your Myspace. They got hooks and drums and harmonies and shit. You get the idea.

What features in between these “singles” is a patchwork of psychedelic folk ballads, schizophrenic jumbles of noisy “feels,” and whimsical jams as unlike each other as they are the band’s more recognizable sound. The “challenging parts” of the record, however, are not my complaint. Even a suite like “Impressions of the Past,” which in five minutes flits from section to section faster than a SMiLE (2004) track, contains enough verve and gumption in each segment to build listener anticipation for the next.

Gather, Form & Fly is a bright record full of energy and dynamism even in its most cacophonous sound collages, but what’s so frustrating—what becomes more urgent with every listen—is how great this album could have been. Megafaun are so busy running from their songs that they cannot see how good they are. Their muse is so fickle it has them racing breathlessly from one idea to the next, never allowing them to hone any one beyond its initial inspiration. Rather than simultaneously blend their experimental and Appalachian sides, Megafaun choose to jump from one to the other in successive sections or tracks.

This is a pity, since it’s just such concrète tinkering that could take their folk from good to great. In their more accessible songs Megafaun have a formidable sound—immaculately produced and intricately textured mountain music with a heavy dose of indie-folk-rock, like Fleet Foxes with a much-needed shot of B12. Either that, or it’s heartbreaking finger-picked ballads, as convincing as the band’s most intense noise bits. These songs need only some more care and concentration, a longer gestation period, to become truly stunning. Part of that care must involve, paradoxically, a deconstructive disrespect—the sort exhibited by Wilco on Yankee Hotel Foxtrot (2002)—that would see the songs deepened by setting them against a droning or atonal concrète constantly threatening to foil their melodicism.

This would require more fixed concentration than Megafaun appear capable of mustering. For now they are content to be the band with two faces, almost daring you to find fault with one or the other as they flash them in quick succession. Gather, Form & Fly thus trades on kitschy contrast when it could proffer concision, and the result is an album that pleases for a week when it could enthrall for a decade. Should Megafaun find a way to bring both Jekyll and Hyde to the same moment, to perfect the textures they have before moving on to the next, there would be no stopping them.