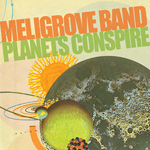 The first draft of this review opened with a very quaint AIM conversation that went something like:

zendaveL05: Man, I wish I’d saved this whole convo, I could’ve totally just used it as the review.
Carrythezorro: LOL!

Then I decided conducting a review in mock internet slang, theoretically as humorous as that may have been, would have been really aggravating. Much like Meligrove Band’s Planets Conspire.

In the recent crop of forthright indie-poppers (Someone Still Loves You Boris Yeltsin, Field Music, even the New Pornographers), the importance of being earnest is starting to take a backseat to the music itself; with so many seemingly authentic voices to choose from, you may as well go with the one with the best arrangements. Ironically, Meligrove Band bring the songs in spades, but it’s the desperate, emo-leaning over-intensity that is the album’s weakness.

Along with the “the” prefacing its name, Meligrove Band has abandoned the retro rock sensibilities of 2002’s Let It Grow and headed into the garage for this record, grand piano and Strokes LPs in tow. Occasionally the “garage” overwhelms the “rock,” as on the chorus of “Our Love Will Make the World Go Around” and the guitar showboating of the finale of “Ages and Stages,” but for the most part it works as an urgency-implying stylistical device. With that urgency already implicit, though, when Meligrove Band take a page from the Exploding Hearts and give the songs a little slack they really take off.

Somewhere under the barrage of staccato guitar stabs and fist-pumping shouts is an assured, composed album. “I’m Easy” and “Everyone’s A Winner” exude pop glee at exactly the right pace, the former borrowing Ben Folds Five melodies and bass fuzz and the later opening with a high falsetto before breaking off into counterpoint “ba da da’s.” Although “Everyone’s A Winner” is rhythmic and energetic, it never careens into the white knuckling of the title track or “Our Love Will Make The World Go Around.”

When singer Jason Nunes goes for the ballads, as on the minor key “Isle of View” and “Delivered From All Blindness,” he’s all sweetness and honey, but putting that same lyrical bent through voice filters isn’t as effective. By album’s end, the never-ending stream of hoarse cheeriness is a little wearing, even without the karate chop guitars: “You’re not alone, you’re alive!” sings Nunes in the hundredth variant of that sentiment on “You’re Alive,” before bursting into a refrain of “You’re so beautiful!” Granted, Field Music did almost the same thing with “You’re So Pretty,” but the subtlety of that song lends itself better to honest feeling.

So here we are again, at the crossroads of Authenticity and Over-Emoting. The members of Meligrove Band feel very intensely about what they do, and when they express that via confident arrangements and more natural vocals, the songs are all the better for it. As the album’s title suggests, this is music that wants very badly to be epic. Planets Conspire may not make it to the moon on every attempt, but it can be a hell of a ride.