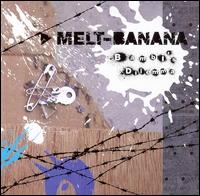 Lest anybody think the disconnected intro to “Spider Snipe” means Melt-Banana has gone Exile on Main Street, the band throws what sounds like a recording of guitarist Ichirou Agata getting his pedals ready overtop. This contrast between rock and rambunction is a central fissure on Bambi’s Dilemma, a title I can only assume suggests a disjuncture between Bambi’s willingness to listen to Thumper yammer on and on about twitterpation and his having to deal with the fact that his Mom just got iced. Or a disjuncture between communist newspaper employee Siegmund Salzmann writing the book the more famous Disney movie was based on and the American Rifleman’s Association demanding that the movie, which they claimed displayed humans inhumanely, be prefaced by a pro-hunting statement. Ah, 1942.

Melt-Banana’s members have often been viewed like Bambi presents humans: bloodless ciphers roaming about the outskirts of the real action, constantly threatening to whip in and knock the shit out of everything. They are, in this view, more interested in the 0s and 1s of screeching free-wired eccentricity than music itself. With their earlier work, that image almost applies: over eight albums and upwards of 20 EPs Melt-Banana has taken noise rock (as in, noise music that maintains the rock) into a space of sublime curiosity where the band members are thrashing participants quarantined on the edge of an idea. It’s a thrilling catalogue, and though certain heads have become increasingly disillusioned with the poppier direction the band has taken on their last few outings, Bambi’s Dilemma extends their legacy even more.

And anyway, I’d argue there’s less of a distinction between 1998’s Charlie and 2003’s Cell Scape than people normally make; Melt-Banana’s early approach to music, like most noise rock, takes some getting used to, but the sense of playfulness and their masterful sense of tone and volume are the precise vein that has kept all their work very human. The core, that idea of chaos, was never entirely removed from performance: Agata’s post-Corgan blister-sonics drive Nebraska-sized divets in any traditional concept of the guitar solo while Yasuko Onuki echoes his high-pitched sonics better than Plant ever managed to mimic Page. They’re both screechy, is the point, and even here, toned down just a bit, you’d be foolish to think that the two musicians aren’t still so far ahead of the post-punk curve it hurts. Throw in bassist Rika mm’’s genius, a garage rock fetish, and some glorious hard-edged melodies, and Bambi’s given me a whole new dilemma: whether this might just beat out Let’s Stay Friends as my favorite post-punk album of the year.

The difference between Melt-Banana’s move towards pop and that of other bands to whom I’ve been less charitable this past year is that Melt-Banana never sacrifices quality composition for a quirky idea—in other words, they aren’t trying to shoehorn their eclectic ideas into pop packages, or needlessly throwing the noise and bluster of their earlier work into the folds of less complex material; they just started writing good punk pop music. And although Bambi’s Dilemma’s latter half does feature some tracks that harken back to the more traditional sound of Melt-Banana, the shift only serves to highlight just how coherent the band’s approach to music has been. “Crow’s Paint Brush (Color Repair)” undulates as the bridge, a disjointed tune that skirts the divide between pop and noise before the album falls off the deep end. The section of the album that begins with “T for Tone” should placate the Melt-Banana purists, but listen to the attention to melody and rhythm they display—it’s essentially the same format as the first half, just played at twice the speed.

The less brutal tracks earlier on span a whole range of styles. “Blank Page of the Blind” is the best example of why this band is genius: after some thick sludge riffs that alternate with Rika mm’’s dizzying bass line and a nuts guitar squall from Agata, the guitarist starts to play these cheesy guitar chord riffs that completely subvert the tense mood of the song. It’s so sarcastic and it grooves at the same time, and you could say a similar thing about many of the tracks: the Sonic Youth tricksterism of “Heiwaboke Crisis” mashed with some Broken Social excursions, the faux hip hop/Pixies hybrid of “Plasma Gate Quest,” or the post-rock cynicism of “The Call of the Vague.” With the possible exception of Tears of the Valedictorian and the upcoming Let’s Stay Friends, this is the best rock album I’ve heard all year. And yeah, I know, some people can’t stand Onuki’s voice. Buck up, kid. You won’t have time to fully make your complaint before this band has annihilated you.