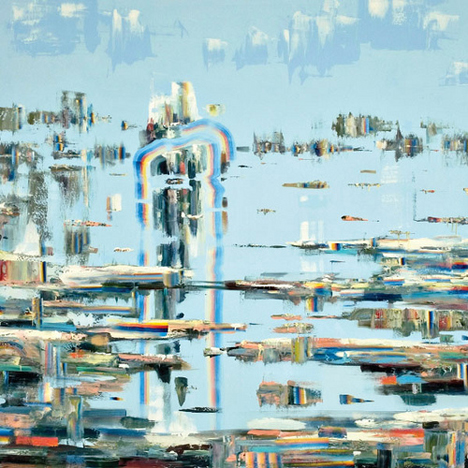 The amount of reconciliation and negotiation and eventual recapitulation I’ve gone through with Memory Tapes’ debut, an album I fundamentally adore, is frankly exhausting. But after a month of digesting Seek Magic thoroughly, oscillating wildly between manic enthusiasm and a kind of defiant distrust of this whole act’s shtick, I’ve committed myself to the stance about which I felt most comfortable from the beginning: this is a very good album, but there are certain things about it with which I take issue.

First off, the positive: there are moments here—brief ones, merely snatches here and there amidst the lesser bulk—better than anything else I’ve heard this year. Dayve Hawk, the major artistic presence behind Memory Tapes and the man toward whom my overwhelming frustration and admiration are unequivocally directed, is one spectacularly talented motherfucker. Hawk understands the fundamental appeal of the lo-fi genres he’s dealing with better than many of its more established practitioners, and when the record focuses on one notion or convention or gesture, his execution is unwaveringly deft. At its best, Seek Magic renders Hawk’s ideas so precisely that it attains a kind of aesthetic perfection; that these moments are subsequently sullied by some seriously ill-conceived choices is really too bad, but this record balances its indulgences so precariously that erring was maybe inevitable.

But oh boy, those near-perfect moments. “Swimming Field” begins rather unassumingly with thick, murky Geogaddi (2002) synthesizers unfurling lazily over a canned beat, but when the real beat comes on strong and the synth line soars, Hawk reveals his true intentions. It’s a pretty conventional bait and switch, but that turnaround is effective and affecting. The album’s rather sudden transition into outright dance music with “Bicycle” is pretty unexpected and feels initially bland, until that lead guitar kicks in and the function of the song’s first three minutes become abundantly clear: this is Memory Tapes beating Cut Copy at their own New Order-riffing game. The track itself seems to exist for the sole purpose of highlighting this one brief solo, but I refuse to fault Wolf for indulgence when the gesture itself is so satisfying. Likewise, using the sounds of a basketball court for backing percussion on is the kind of gimmick that can totally derail an otherwise serious and moody song, but “Green Knight” pulls it off without veering into Nike commercial territory. For thirty brief seconds Hawk shows off his more serious side, and the sense of tension compliments “Bicycle”‘s levity quite nicely, but the mood is totally disrupted ninety-odd seconds in (more on that in the next paragraph). Finally, there’s “Plain Material”—Hawk’s blatant shot at not big pop music but Big Fucking Pop Music. By now his tendency to back-load his best songs prepares keen listeners for eventual punchlines following low-key setups, but who knew Seek Magic was capable of this kind of grandeur? This shit’s transcendent. And, again, its near-perfect execution of such a simple but sublime idea makes it very easy to love this album—if only it were all so wonderful.

But then oh boy, those reservations. The rather lavish material rounding out Hawk’s best songs may border on excessive, but were excess Seek Magic‘s sole issue, you’d be reading a much more forgiving review. Yes, Hawk’s graceful little victories outweigh his missteps considerably, and some of those errs—like Hawk’s overextension of himself on the prodigal “Stop Talking,” which is far too long at over seven minutes—are minor. But there are bigger problems here: on “Green Knight,” Hawk’s low-key atmospherics are completely undermined by the ridiculous guitar solo that comes in at 1:35. This is seriously cheesy shit on a record that otherwise (smartly) ignores irony, and it ruins one of Hawk’s simplest and prettiest songs. But I’m more confused than disappointed. I just don’t get where Hawk’s coming from with that move—is this a rare lapse of judgment on his part, or am I taking deliberate camp too seriously? This confusion culminates with “Pink Stones,” which sees Hawk taking his interest in dance music and genre-dabbling to an unfortunate and album-crippling extreme. And as if its straight-up lousiness weren’t damning enough, the track finds its home smack in the centre of the album; eclecticism often gives rise to pacing issues, but dead weight this aggravating threatens to colour the listening experience entirely.

It’s difficult to reconcile such drastic missteps with the high standard set by Seek Magic‘s best moments. This is a real shame. I’d love to recommend this record with the same giddy enthusiasm I feel during the “Bicycle”‘s guitar solo or “Plain Material”‘s chorus, but that disclaimer of imperfection stands. The good news? Dayve Hawk’s allegedly committed to two albums a year under the Memory Tapes moniker, with one more full-length due to drop before 2009 is up. I look forward to the Best Of.