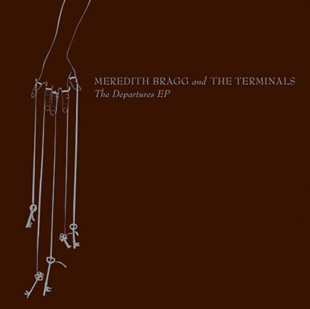 Meredith Bragg and the Terminals

When you’ve had the relatively impressive critical approval that Meredith Bragg gained with his Vol. 1, the impulse to keep yourself in subsequent critical view is no doubt a strong one. If The Departures EP unquestionably achieves one aim, it is to remind listeners of the substantial quality of Vol. 1. The EP itself, however, is -- as one might expect of a quickly released, limited edition follow-up EP -- relatively short on ideas and songwriting development. Rather than fully weave out the structures on display here to their full potential, Bragg leaves them as appetizing nuggets begging for a full course development.

Atmospherically, Bragg’s compositions still haunt and entrance. The gentle collision of transcendent synths into the fragile chording of “Empty Beds” is deeply affecting, and the delicacy of “Talk Me Down’s” wavering melodic opening strains builds a profound amount of emotional tension before its primary rhythm breaks the momentary spell. His competent cover of Jason Molina’s “Two Blue Lights” creates a dynamic set of builds to arrive at a strong visceral peak.

The recurring issues that hamper the overall quality of the music, however, are noticeable. The first is, regrettably, Bragg’s lyrics, which too often veer into the realm of cliché and, at their worst points, inanity. The lyrics of “Empty Beds,” in their prominence, are a painful example: “Some things never change / The more you stare the more the stay the same / Sometimes people try / I don’t why.” Given the similarity of Bragg’s timbre to Ben Gibbard’s, Bragg’s lyrics and delivery often encourage comparisons with the worst of Gibbard’s lazy penning, undermining the emotional heft of his songwriting with platitudes. “Postcard from Boston” does better, but still disappoints with sentimental stumbles like “We are all abandoned / When the lights go out / We turn in / And our conversation presses down / The fan spins round and round and round.”

The other issue that betrays the lack of concerted songwriting in this EP is Bragg’s general strategy of predictable development, which begins to place atmospherics above songwriting effort. The components of Bragg’s developments can be interesting, but their intensification, and the inevitable entrance of Elizabeth Olson’s cello to turn the heartbreak-factor to 11, becomes noticeably repetitive. When Bragg’s cover of “Two Blue Lights,” develops according to the exact same strategy, the initial apparent dynamism of Bragg’s songwriting begins to look more like a dependable -- and somewhat too easy -- fill-in-the-blank course.

Fault-finding aside, however, the evident potential for breathtaking expansion and improvement on these ideas is more than enough to warrant attention to Bragg’s doings. If The Departures EP eventually falls to the status of mere hold-over, it’s certainly a respectable bridge to better things. It’s a double edged compliment, but the improvement required to fulfill the promise ought to be well within Bragg’s reach.