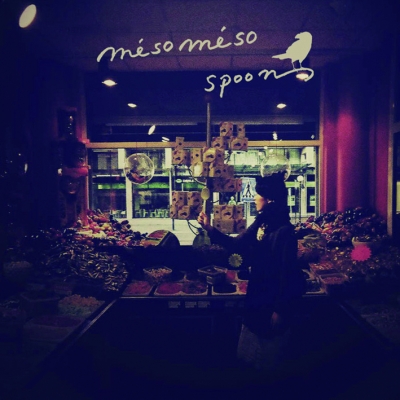 Let’s end the first decade of the third millennium in the way apocalyptic cult Aum Shinrikyo would want to: divine Japanese pixie folk, the perfect antidote to unclean gluttony. Meso Meso’s sophomore LP sees agoraphobic Tokyo soloist Yumiko branch out for the second time, hashing out the sequel to the Mitten debut she exhaled in 2008. Circa ten years ago, Japan’s music scene had a much more mysterious aura to it, but in the last half-decade and tax year of YO! Sushi, Japanese culture is magnetic again. It’s little surprise, then, that Yukimo’s latest musical template reads like a future Natsuo Kirino novel, narrated almost silently by its one surviving character and as gravitated as an old Kurosawa flick. In Meso Meso Land, the antics are still very much as screwball as ever—it’s just the screwball moves very slowly, so if you were expecting things to be dancefloor friendly you’ll need another moment with the peace-pipe.

There. That’s better. Now that your vision is suitably flushed and the veins on your hands have turned interesting, you’re ready to pad through Spoon‘s tricky woodland and watch things come to life like that film. Having perfected her four favourite aptitudes—glockenspiel, accordion, melodica, and toys—Yumiko crafted Spoon from ten modern fairy tales; ten modern Japanese fairy tales. There’s no Barney cuddles or Disney potential in these unprotected yarns: this is more about girls buried alive in monastery soil, their voice carried away in hollow glass ornaments. On the surface, Spoon might well seem like any other Icelandic charmer (Yumiko cites múm’s Kristín Anna Valtýsdóttir as a major influence), but delve beneath the layers (i.e. speak Japanese) and it grows a couple of extra dimensions. Moving from the macabre piano tattoo of “Majo,” a urine-inducing bedtime story that churns like A Perfect Circle’s “Imagine,” through to “Smoke”‘s Jónsi & Alex funereal developments, Spoon is one very misty trickster. Yumiko changes personalities from track to track while maintaining mass and density. She’s a Leyden jar, carefully manipulated to hold a faint charge with sparks arcing prettily on the contacts.

The only problem is: no bang. It might clock in at under forty minutes but the crescendos on Spoon are miniscule, barely allowed to let go of the surface. The peaks are still there, believe me: “Unicorn”‘s drunk stumble home, or the piano hopscotch of “Aurora” that builds into a chilly wintry judder, but anyone lacking an ambient temper will file this under Björk gone to primary school. Occasional tape layering produces an eerie shanty effect, and the cassette squeaks that double as gerbil vivisection show Yumiko’s not so shy she can’t kill stuff, but really Spoon could be marketed as exotic downtempo rather than unpolluted Japanese pop. The cool kids will be confused, trust me: where’s the colours? Where’s the hook? The rush, the showdown, the promise of a fad? Mewling like a warm box of kittens might be subversive, but when set to gluten-free guitarplay you’re never going to reel in the fidgeters. If only the world turned more slowly Spoon would be essential: it breathes light onto all the stupid molecules, wooing you like a very lazy stalker. As it is, you’ll need access to a floatation tank and a fortnight to feel the album finally click. Failing that, find a very hidden pond. One where even the cool kids don’t go.