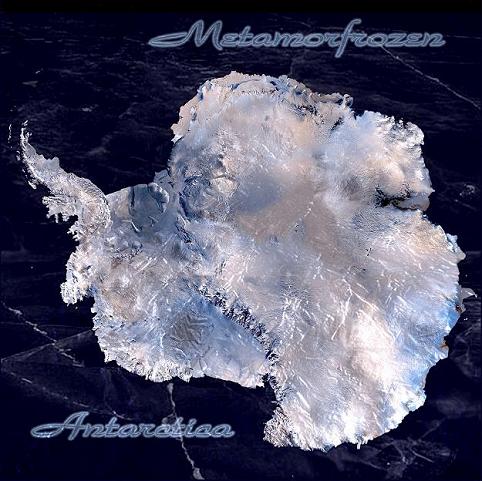 The Larsen B Ice Shelf has inspired its quota over the years, from symphonic eighties Vangelis through to that Dennis Quaid hailstone movie, but I can’t think of a time it’s been serenaded as lovingly as it was on Metamorfrozen’s only album: a 2007 .zip file authored by one “Vampiir of the North.” Antarctica preserved the white continent in an eighty-minute monolith, boring for hope in those frozen cores with force ten ambient angles. I’ve always been drawn to the South Pole—not least because it’s the only landmass left on the planet that’s yet to be infested by Starbucks—so in the absence of a trust fund that can whisk me to New Zealand for a place on one of those luxury ice cruises, the reissue of Antarctica under Creative Commons distribution is as close as I’ll come to breathing the same air as Amundsen. And Christ, is this stuff cold, sharp enough to burn the corners of your lungs as it pisses yellow serifs on your snow angels. This is how the continent should be taken in: howling, courageous, close to death; not from the porthole of a thermo-sealed schooner while you try and spot some nonexistent reindeer.

So, ignoring the fact that one’s an album and one’s five million square miles of ice, what’s the difference between Antarctica and Antarctica? We’ve all seen the documentaries of frozen capsules and people in North Face beardlines—what’s to say Metamorfrozen’s not just a composer who got burnt by the Discovery Channel, forced to upload his prospective themes instead of deliver them to his would-be producer? Well, for starters, the ten tracks here are no ordinary domesticated penguins. They’re as wide and brutal as the anti-land that hatched them, steamy breaks cracking like fissures in the cryosphere. In fact, the opening “Metamorfrozen” is so rich it could almost be tropical, with its squawling birds and crashing waters, but one minute in, it’s a hoar of triumphant vapours, sizzling like pylons at dawn. This was always one of the main draws of Antarctica for me—it’s amazingly plush for an ambient CD-R, and Metamorfrozen’s truly committed in making sure his is a prominent opus. He obliterates the tickly trickles the likes of Múm try and flog you with and instead slowly burns out your corneas. The total darkness is there too, especially if you jump straight to “Subglacial Lakes” where a hungry cave begins groaning. A word of warning: if you’re holding onto this one for chill-out time, be sure to have some spare bulbs handy. Just in case the shadows start twitching.

The reserve draw of Metamorfrozen’s vision is it arrives in tight 20/20—he knows how to weigh in those epic pads with the right base of weathered white noise. Sometimes he’ll slip from the ambient genre altogether to bring the cleanest cubes to his mixture, with heavier efforts like “Polar Plateau” working in regular beats. It happens on two or three other tracks, too—black foghorns that roll out a murmur of dance on “Dark Days under Mount Terror,” evil Terminator synths rising—and on one occasion goes fully soundtracked, with “Aurora Australis”’ deep static crumbling into something from Sunshine. Ultimately, though, what underpins the whole voyage is the tinge of tragedy in the knowledge we’re killing the place we’ve been listening to. The funereal “Ice-o-lation” and whiteout of “Mountains of Madness” remind us of that, booming unforgivingly as the continent destructs thanks to the planet’s appetite for printer ink. One day our descendants will flock to the wet dregs and think, “All this could’ve been ours.”

It’s ironic that the coldest place on earth should work so well as a barometer for its life signs—lethal, unique, brilliant, uncertain. But regardless of the fate of its homeland, pride boils in Antarctica‘s tracks, as real as the tribes the movies would have you believe once lived there before some catastrophe. In the day-to-day dither of ambient music it’s nice to remember there’s someone out there fretted, extending their scope beyond the requirement of reproducing discontinued tape drones. I’m tempted to reveal that it snowed the last time I played it, but fuck it, that’d be cheating. All you need to know is that Metamorfrozen made some stark and beautiful music, available for free now that the author must have squared off his last remaining dues. My advice to you, Mr. of the North, is to get yourself down south again soon.