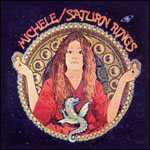 I’m going to say this album is great, but let’s be clear: folk-psych is always tricky, precisely because how much you get from it will depend on how much you can stand outdated sentiments. That said, a glut of reissues have refocused attention on long-neglected late-sixties works, and I thought this one, at least, was worth highlighting. Michele O’Malley’s only album is certainly a mixed bag; wedged between haunting gems are quirky folk tunes and reed-driven MOR jazz ballads. If you can navigate the Head Shop-isms, though, oh wow are there some great songs here. It shouldn’t be that hard; Michele’s voice is pretty dynamic, wrenching between full-timbre wailing and clipped, sweet phrasings, and her backing band includes excellent Mothers of Invention alums like Elliot Ingber and Lowell George (who, interestingly, never actually played together in that group).

Not that this sounds much like Captain Beefheart (Ingber’s band at the time) or Little Feat (George’s seventies outfit). Michele exists somewhere between Judee Sill, Vashti Bunyan and Tim Buckley, which (obstacle number one) becomes apparent only after the first song, the oddly-chosen “Would You Like To Go.” The song is a predictable hippy presentation of the world: “Would you like to go / back to the land that you and I once knew?” Prophets playing electric guitar? Check. Choruses of angelic hosts sing hallelujah with portable phonographs made in Japan? Check. I see—it’s about a psychedelic Macy’s! The reductive portrait of humanity is only made more annoying by the burying of Michele’s vocals in a swarm of lazy instrumentation and chorused singing. Fortunately, “Blind As You Are” has Michele exerting more influence; even if the lyrics are still a bit mystified with their own mysticism, her lilting vocals lead into a sped-up mid-section, and the interplay between flutes, piano, and bass is intoxicating. Towards the end, the switch is flipped on the hippiedelia: “You can die / as blind as you are / Nobody’s gonna care.”

In quick succession, “Song to a Magic Frog” defies its ludicrous title, turning out to be my favorite song on the album. Michele unfolds the line “Will you ever / will you ever know?” over a steadily building arrangement that never overshadows the power of her naked voice, spiking her own syllables with the spelunking proficiency of a Rita Lee or Joni Mitchell. “Frog” is followed by the brilliant Eastern-tinged “Fallen Angel”; clanging percussion and violin swirl as Michele bends her voice like Tim Buckley on Starsailor, three years before that particular monster would be unleashed on the world. Both songs are excellent, but even more enticing is how their two extremes are almost mutually exclusive, and the dynamic range Michele reaches between the two is pretty fascinating.

Of course, the excellence is deflated somewhat by obstacle number two, the quirky “Spinning, Spinning, Spinning.” Opening with a flute/reed duet, Michele brings the straight-folk inflection to overwrought lyrics like, “A cripple taught me how to dance / A blind man taught me how to see / A fallen angel taught me how to fly / And a prisoner taught me to be free.” True story: a rabid dog taught me how to gnaw my own face off. The song is particularly sad given that two songs later “Musty Dusty” fulfills the straight-folk quota for the album without the teeth-grinding lyrics, allowing Michele to wind a slight child imitation over sighing violins and guitars as she details her attic-exiled toys. “Know Yourself” relies a bit too much on the jazz-glut verse structure, a curious vehicle used by many adult contemporary artists wherein the band simply plays drippy chords while the singer sings pretty with pretty much no melody, but then suddenly, out of the blue, we launch into this majestic honky tonk chorus and the song is awesome for a brief moment before becoming all drippy again. The chorus is so good it seriously saves the song, but it’s a shame that the verses weren’t crafted with the same attention to detail.

“Lament of the Astro Cowboy” throws a McCartney bass line under a psychedelic workout that bounces Michele’s voice all over the spectrum; she chokes clipped shrieks and growls bluesy Slickisms without skipping a beat. “White Linen” marries Foxtrot sensibility to a “Wooden Ships” attitude, and Michele works the Scott Walker out of her system, baroquing her delivery over beautiful piano structures and undulating tempos. “Misty Mirage” is lovingly stripped down, hinging on a series of gushing background harmonies as the chorus winds out. The lyrics are a bit paltry, but the song as a composition is a pretty hot joint, ascending at its coda to a dog pile of overdubbed Micheles cycling over a triumphant drumbeat. The album closes with “Believe You,” another strong vocal performance, uniting a country lilt with a rock approach. It’s similar to the effect achieved by Pink Floyd’s work on the soundtrack for Zabriskie Point.

Saturn Rings are dust, and this is a dusty album. I’m pretty sure you could sync it up with Passenger and everything would seem kosher. Even the ending has a similar effect to that of that film: over fading guitars, a voice intones, “Come. Come listen.” And…silence. If these are the sorts of things labels like Fallout can unearth from the late sixties, then I hope the silence surrounding their existence will cease.