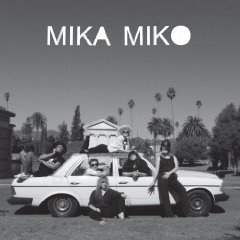 I’ve had album-of-the-year/decade lists on the brain for the past couple of weeks; perhaps you have too. (“List”-omania, amiright? No? Fine.) I’ve spent too much of my time this month measuring out perfections and imperfections in the language of scientific measurements and AOTY binary code (Is “No More Runnin” a bigger side B baton-drop than “Fluorescent Half Dome”? Big enough for, say, a ten point deduction?), and I’ve almost tricked myself into thinking that a cohesive, symmetrical, and grandiose album is the one-size-fits-all peak of a band’s musical expression. So here, at this important December juncture, I choose to address Mika Miko’s We Be Xuxa not because it’s a great record (it’s not), but because it’s the product of a great band who never tried to make a great record, reminding me of the refreshing beauty of all the music I listened to and enjoyed in 2009 that exists somewhere outside of this bizarre, looming pageant. I’m finding it the perfect antidote to this time of year.

Mika Miko broke up a couple of months ago, caught between too many larger forces to receive a fitting obituary. So: they will forever be remembered as minor players in the Smell scene, but for reasons more geographical than sonic, being they’re from LA but don’t sound anything like the lo-fi scuzz of No Age or Abe Vigoda, the associated bands whose mountainous and overblown hype often drowned them (poor Mika Miko) out; they were an (almost all-) girl punk band who engaged in neither post-Kathleen Hannah fishnet politics nor post-Ronettes eyelash batting; and their live show centered around what critics could easily dismiss as a gimmick (singer Jennifer Clavin shrieked into a red courtesy phone instead of a mic) while their other lead singer, Jenna Thornhill, frequently sang like someone doing a perpetual Count Dracula impression. I don’t think I’m going out on an incredibly treacherous limb when I predict that the gods of Musical Importance will not bestow anything particularly generous upon this band.

The most tragic thing about Mika Miko’s break-up, though, is that it seals their fate as yet another band that failed to leave behind a record that even sort of approximates how exhilarating their live show was. I saw them twice and each time they put on the type of show that obliterates any recollection I have of any other band on the bill. Clavin pogoed all over the place, transmitting syncopated yelps into that iconic courtesy phone as (original) drummer Kate Hall stood behind her kit pounding out bouncy, primal beats and guitarist Michelle Suarez tore through infectious surf punk riffs. It was the sonic equivalent of a beach ball that finds its way into a circle pit and, miraculously, survives.

Based on their live show, I’d been falteringly talking up Mika Miko for years, so when We Be Xuxa came out earlier this year, I hoped that it would finally be the record that would prove my ravings right, the one to embody all the raucous energy and unabashed fun they were able to create whenever I witnessed them in person. It wasn’t; if anything, it’s a regression from their debut LP, the promising but slight C.Y.S.L.A.B.F. (2007). Mixed as if the band were shameful of their live presence, Xuca keeps the listener at a chasmic distance from anything resembling intensity or urgency. The guitars are lamely quiet, too tame (an unforgivable error considering the sort of chops Suarez displays live), and the vocals don’t pop with that warm, obligatory static that distinguished them on earlier recordings. There are some definite highlights (“Totion”‘s vaguely spooky lead riff and loopy dueling vocals; the sunny and speedy “I Got A Lot (New New New)”) though I knew from the first listen that this wasn’t the album I’d been waiting so long for Mika Miko to make.

And is it even necessary for a band like Mika Miko to strive towards making a Great, epitomizing record? I’m finding it suddenly refreshing that it’s not. Bassist Jessica Clavin once said in an interview, “I think we come off better live than we do recorded. It’s better to have that impact as a live band, isn’t it?” I don’t think it’s a question of better or worse, but it’s certainly a reminder that for some bands, the hallowed record is not the be-all-end-all, that a band called Mika Miko left something more elusive, something less difficult to quantify and rank. If you never saw them live, I can’t give you any of their records to prove they were as stalwart as I so claimed; I guess you just had to be there.