Other Records by Minus Story 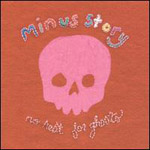 Minus Story: No Rest for Ghosts

Minus Story: Heaven and Hell EP 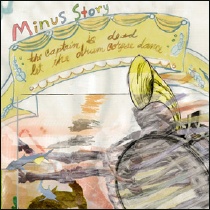 It's been a few years since E6 began its deterioration into a motionless corpse pulling a Weekend At Bernies in a semi-successful attempt to prove there may still be life running through its veins (Circulatory System, Of Montreal and, to a much lesser extent, The Minders and Elf Power being the very last traces of a pulse), making it clear that someone was going to have to carry on their torch, bringing another generation's worth of lo-fi psychedelic experimental art-rock to the table. Phil Elvrum was our man until Mt. Eerie foretold the story of his impending insanity, now in full fruition with his current batch of live shows. Only time will tell where exactly he'll go with this on his upcoming Mt. Eerie records, but we haven't the time to sit on our hands hoping that he'll pull it together a few more times. A few of my friends are holding hope for Phil, but one of them has a stick hut in his backyard that's being transformed into a paper mache statue. Take from that what you will.

Then there's the Unicorns, who came along last year with their own "angle" on experimental pop: where other such groups have the tendency to add subtlety to their art, the Unicorns came as the twice removed boisterously gay cousin of the genre, inhabiting many of its trademarks but with a confident and ridiculous flair that would make Sir Elton John, himself, blush. Hidden somewhere in the middle are groups like Broken Social Scene, who seem to be moving from their heavily experimental roots into a much poppier direction that may or may not shed their unpredictable side like dead skin in the future.

The Minus Story, now three albums into their recording career, constantly move somewhere in-between these poles. Shifting between subtle psychedelia, Neutral Milk Hotel-ish folk-pop and noisy art-rock (that's a lot of nonsensical genre terms, I know, but stick with me), the four piece -- one of several bands stepping into the rather large space left open by E6's slow dissipation -- have given us their first great work with The Captain Is Dead, Let The Drum Corpse Dance. A short disc (only 36 minutes in length), it doesn't overstay its welcome or go on into experimental excess; it takes off in a few intriguing directions and feels complete without needing an hour to figure things out.

It starts with two of its least accessible tracks, "Won't Be Fooled Again" and "The Happy Activist." As more a preface to what comes after the two tracks than a foreshadow of what's to come (odd enough for a 36 minute album), the former moves through electronic bloops, a repeated keyboard line (that also happens to be the chorus melody), layers of harmonies, backward samples and more instruments than I'm willing to type out here, from horns to xylophone to highly distorted drums. It all comes together into cacophonic whole that, unfortunately, becomes muddled in the lo-fi aesthetic. Likewise, "Activist" loses some of its steam with the distorted vocals and overbearing drums that distract from an otherwise memorable chorus. On the other hand, the instrumental closing is beautiful, using the haze of slightly distorted synths and chiming bells to slowly close out the otherwise frantic track.

Then the record takes its first real shift. "Gravity Pulls," though utilizing the same range of instruments and production techniques, does away with any significant distractions. It comes as a surprisingly accessible cut after the opening duo, but one that inhabits all that is truly great about this record: the melody is excellent, the production is lo-fi without being annoyingly so, the arrangement is creative, and it adds enough turns to its three and a half minutes to keep the repetitive melody from losing its impact. "Open Your Eyes" and "You Were On My Side" follow in a very similar vein, giving Captain a much welcomed easily digestible body, especially the latter, which builds to one of the record's most immediate moments. It leads into the record's real centerpiece, "Joyless Joyless," which combines the best aspects of what came before it: a distorted backing, an impeccable melody and an absolutely massive arrangement. It's easily one of the best songs I've heard so far this year.

"You're My Air" marks the next shift for the record, moving into a relaxed, epic direction; over a span of eight minutes, the track moves through a seemingly directionless series of ideas, all held together by a repeating piano progression and Jordan Geiger's slightly off-kilter lead vocals. Not the most accessible number, sure, but its closing minutes are worth the lengthy build. "The Children's Army (Bite The Tyrant's Tongue)" ends the album, chasing the somber "You're My Air" with a Polyphonic Spree-ish choir of "fill your heart with love." It's an strangely optimistic way to end such a strange and conceptually varied record.

Maybe it's the oddly cheerful vibe or maybe it's the twisted parade arrangements, who knows, but there's an awfully celebratory aspect to Captain that makes it so listenable even despite its sporadically harsh production and rough opening. And if this doesn't magically stir some life back into that barely twitching E6 corpse, we'll at least have more than impatience for that next Circulatory System record to keep us busy until something hopefully can. Shit, even Bernie got figured out eventually.