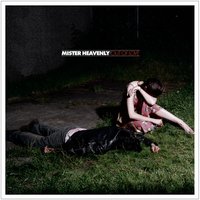 Nick Thorburn tends to thrive when set against the spark of new collaboration. Very few of his musical projects have survived beyond an album or two, and the one that has exhibited some semblance of longevity, Islands, has suffered because of it. Up to now, he’s tended to find an artistic kinship, work the fresh dialogue into an exciting new sound, and offer fruit equal parts unexpected and sweetly satisfying—that is, when it’s not simply out-and-out baffling (see: Th’ Corn Gangg). At first blush, Mister Heavenly, Thorburn’s new project with Ryan Kattner (aka Honus Honus) of Man Man and Joe Plummer of Modest Mouse, doesn’t seem likely to disrupt the established pattern—there’s an intuitiveness on display evidencing a group of highly talented musicians working toward each other’s individual strengths without ceding the spotlight to any one personality. In other words, Mister Heavenly sounds like its own unique thing, and with a handful of excellent tracks littered across their debut LP, Out of Love, you can pencil this in as another well-considered Thorburn endeavor to keep an eye on. That the album is far from great, however, is, in a sense, gratifying, as for the first time in a while it seems as if the best work from a new Thorburn project may actually lie ahead.

Even setting aside the band’s own dubious “doom wop” descriptor, it’s not difficult to hear the trio’s fascination with early rock ‘n’ roll dynamics or the simple, vaguely macabre storytelling of the concurrent era. In this way, Mister Heavenly may most closely resemble Man Man—any song with Kattner’s wild-man howl and imaginarium keyboards must inevitably conjure visions of his main act’s paint-splattered, ritualistic sideshow—but it’s impressive how seamlessly he and Thorburn fold their idiosyncrasies into a unified songwriting voice. Verses and choruses are mostly traded off, Thorburn whispering flirtatiously as the tunes skip toward many anthemic choruses which Kattner largely handles in his alternately creeping and boisterous bark. Plummer, meanwhile, anchors the proceedings, which tend to establish grooving AM-style strides only to turn on a dime; playing alongside Isaac Brock has ably prepared him for Kattner’s equally unpredictable spikes in energy, and he ably keeps pace throughout. Musically, they’ve tapped into something both familiar and raw, and it’s this concentrated, well-considered M.O. that helps one forgive a few of the record’s shortcomings.

The songs on Out of Love tend to fall in one of two categories: brief, negligible exercises in style that probably could have spent a little more time in the incubator, and longer, more structurally ambitious, and just flat-out more intense vocal and instrumental showcases. In the former group there’s “Charlyne,” “Pineapple Girl,” and the three songs which close the record, none very memorable. In the latter—and towering over the remainder of the record—are excellent opener “Bronx Sniper,” band missive “Mister Heavenly,” the unsettling “Harm You,” and album highlight “Diddy Eyes.” Of course, a few tracks admirably split the difference (“I Am a Hologram,” “Reggae Pie,” “Hold My Hand”), but after a couple of spins it becomes rather obvious that some of the tracks here are simply padding between the standalone gems. With songwriting this pointedly masculine (“She kisses like a brick / Her lips are like ships / She sails right through the thoughts that you harbor,” Kattner jadedly announces on “Reggae Pie”), it’s understandable that most of the record’s most memorable moments are reflected in these furious outbursts.

Watching the band perform just last week at the FYF Fest, the chemistry between the three was palpable and impressive for such a newly formed project (Kattner’s windmill keyboard pyrotechnics and Thorburn’s searing guitar solos an unfortunate casualty of the transition from stage to album). That this energy doesn’t cohere 100% of the time on record is no slight against the many ideas here; it may be unfair to say that Out of Love would have made a better EP, but there’s something here boiling under the surface that in all honesty none of these guys’ bands have been able to replicate in quite a while. I’m thus more inclined to ride with these three down their ‘50s doo-wop and early garage-rock boulevards than I am other such “supergroups” whose personalities sound grafted onto each other with no regard for compatibility. Mister Heavenly, for better or worse, have debuted as a strong musical voice, one with perhaps so much combined talent and perspective that their reverence occasionally gets the better of them. But nevertheless this is one project I’d hope to see Thorburn develop and grow with for the foreseeable future, and it’s been far too long since I’ve been able to say that.