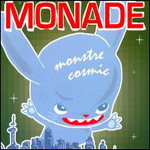 Stereolab have, in total, released roughly 4,876 albums and about 36,000 singles and EPs. Despite their prolific output the group’s key players express their excess creativity through spin-offs. The one that really matters is Monade and this is all down to Laetitia Sadier, who despite being mostly resigned to lyrical and vocal duties is the heart of Stereolab. With her vocals, Laetitia has run a unifying thread through Stereolab’s genre leaps and clever-clever song-structures for over 15 years. And we kinda fall in love with her all over again with every release.

Monade, as a proposition, seemed the perfect channel for this unhealthy infatuation being the conduit through which the voice of Stereolab had the chance to stretch her song-writing muscle. Socialisme ou Barbarie: The Bedroom Recordings (2003) was, in that respect, the most perfect of debuts. Intimate, lo-fi and charming, it collated songs from the previous six years recorded in Laetitia’s home and with Rosie Cuckston (from the equally eccentric Pram). The sound was still always going to be intrinsically linked with Stereolab but there was an underlying melancholy which swept through the songs like a chilly autumnal breeze which was refreshing and endearing. At times though the lo-fi production meant some songs (such as skeletal disco of “Vent Du Sud”) could seem like doodles hungry for a full band to release their true potential.

And this we received with 2005’s cheekily titled A Few Steps More. Backed by a full band, we got Technicolor arrangements and textures the debut only hinted at and a genuine sense of enjoyment expressed through short witty jams and protracted instrumental passages. In a way, it was great to see Sadier let her hair down, but Monade was still at an embryonic stage and this seemed more like an exercise in feeling out the abilities of her new ensemble.

So now, with Monstre Cosmic we have Monade’s first proper album since finding their feet on A Few Steps More (no pun intended). Well, they couldn’t have set themselves a harder task. On Too Pure’s site Sadier has described Monstre Cosmic as intended to have been written as one long track, constantly weaving “like a river”—the antithesis of the drones which are the bedrock of most of her parent band’s output. Lyrically, the album is reportedly an exploration into the relationship between light and shade and the gaps that fall between reality and fantasy. Heavy stuff.

So, how does attempting to intertwine musical and lyrical concepts to present an album struggling with duality and perception translate into reality?

On the sumptuously arranged “Étoile,” which uses high-registering keyboard stabs and one of Sadier’s most beguiling melodies to tiptoe forward at a steady hesitant pace, you might be forgiven for thinking the song is about love or of longing. Instead we find Sadier incarcerated in a mental institute with “abnormal moral suffering,” rooted in fear of realizing that monsters live within us all and in speaking of these monsters her stay may be extended. The clash of the lyrics against the arrangement creates a delicious dichotomy being equally hopeful in tone but hopeless in sentiment. This route is successfully repeated in the closing track “Change Of Destination” which marries a repetitive plea of escape from life to breezy chamber-pop.

Musically, the light/shade concept isn’t as literally expressed through the marriage of bleak lyricism with chirpy arrangements. On “Lost Language” the music is expressive—jangling guitar chords crash against dramatic strings from the Bordeaux Conservatoire—at times resembling a chase scene from a feverish version of The Prisoner. “Elle Topo” marries echoing slide guitar intros to skittish jazz, transporting you from under the last neon gasps of a Taco Bell sign in the middle of Nevada to a jostling market-alleyway in Bordeaux.

“Regarde,” the peak of the album both thematically and musically, switches from a lolloping funk to a string-strewn freak-out; Sadier is at her most confrontational, eyeball to eyeball: “You will see in my eyes all the brilliance of life and my divinity, the monster than I am.” It’s a statement far more damning and infinitely more elegant than “Fuck you, I won’t do what you tell me.”

Elegance, of course, is something we’ve come to expect from Sadier, but the effortless delivery would have been impossible without such a tight machine working behind her. David Loquer’s drumming is pixel-perfect in tempo changes and oddly melodic, capable of introducing colour and flavour such as on the thrusting guitar-driven “Entre Chien Et Loup.” Marie Merlet’s bass playing is also a revelation showing both fluidity and weight, adding a dubby sensibility throughout. Whether this is down to the huge reggae following in France or just a happy coincidence is unknown but it lends a gravitas to the more wistful songs such as “Change of Destination” and “Invitation.” Even Nicolas Etienne’s keyboard playing is thoughtful and sympathetic which separates Monade sonically from Stereolab’s sometimes key-heavy approach (although he has the chance to break out on the outright dancey hidden track “White Light”).

It is in the perfect balance between all these elements that Monade deliver on Sadier’s conceptual promise—appearing poised, even when alternating between tonal soundscapes. As a result, ironically, given Monstre Cosmic’s themes of duality and perception, it is through her bandmates that Sadier finds her voice. Indeed, the decision to include a complete lyric sheet in both languages shows a sense of conviction hitherto underplayed. Let’s hope she hasn’t lost it on Stereolab’s 4,877th release.