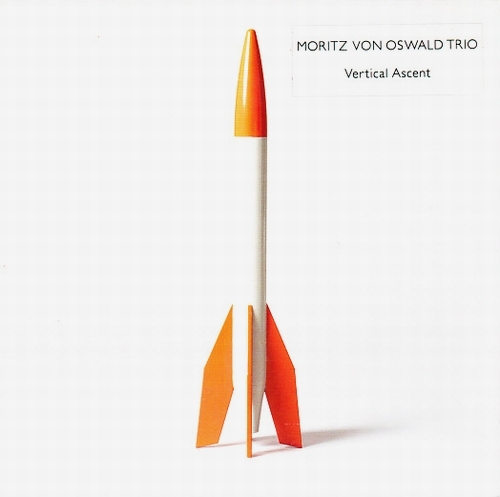 For some the little orange and white rocket on the cover of Vertical Ascent might conjure a cinematic set of images: a suspenseful countdown, engines roaring to life, lift-off, the gradual climb, and finally disappearance into space. But don’t be mislead; there is nothing so straightforward, predictable, or bombastic here. In fact, the album’s most linear feature—the track titles, which move from one numbered “Pattern” to the next—belie the wonderfully prismatic shifts of glimmering percussion and impressionist electronics within.

A sublime paradox like this is just what one would expect from a collaboration headed by Moritz Von Oswald, who is celebrated for his contributions to the groundbreaking and otherworldly minimal techno outfit Basic Channel, among other things. Oswald has found natural partners in Max Loderbauer, from the ambient electronica group Sun Electric, and Sasu Ripatti, the versatile Finnish electronic composer who goes by many aliases. All of them are intimate with the ethereal realms of electronic music, and they are all classically trained (Oswald and Ripatti in percussion, Loderbauer in piano), but they are also just as capable of producing sultry, dance-oriented grooves. On Vertical Ascent, using hand-made metal percussion, Rhodes, and electronics, the trio has concocted four long improvisational tracks that are as heady and layered as So Percussion’s take on Steve Reich’s Drumming, but as fresh and cool as a Neapolitan.

Sounding at once organic and unreal, Vertical Ascent is full of beautiful contradictions. The crude, steady clap of “Pattern 1” at first sounds completely random as it rubs against brisk swirls of hi-hat, but gradually the two lock together to maintain a driving rhythm that mutates and glistens. The slow bass pulse of “Pattern 2” leaves breathing space for echoes of tinny percussion, lingering bells, and subtle strands of keys, making for a feverishly meditative twelve minutes. “Pattern 3” has an exhilarating but bizarre feel, its lush Rhodes chords and jarring waves of electronics driven by ricochets of mutant steel drums that pan from ear to ear. The heavy beat and dub bass of “Pattern 4” is a refreshing return to more conventional minimal techno fare, but eventually the steady groove is overtaken with quaking electronics—proverbial locusts descending on the cornfield of common practice, or just some mischievous fun?

It’s a testament to Basic Channel’s influence that hardly a day goes by without mention of the duo somewhere in the electronic music universe. Some might take the title of this album to be a preposterous suggestion that Oswald is looking to reach even greater heights in an electroacoustic realm. But it seems more likely that this trio has humbler intentions: showing little interest in wowing the listener with an impressive climax, they explore all the splendor of the journey itself.