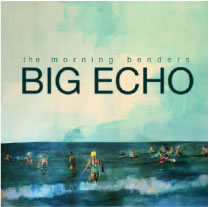 Big Echo wants you to know that it is a summertime record, and if its album cover does not immediately inform you of this, lead-off track “Excuses” opens with enough of a crash to knock you backwards under a shallow wave and bombard your unsuspecting nostrils with seawater. But this isn’t a top-down, driving-to-the-beach sort of summer record, it’s the other kind: one you’d listen to after waking from a daiquiri-induced beach nap, smacked back into hazy consciousness by the prickle of a fresh sunburn and mid-afternoon hangover. And “Excuses,” fortunately, swings both ways, a perfect song to wake up to: panoramic and lovely, it’s alive with the swell of nostalgic strings and the chatter of tinkling piano keys—a welcoming introduction to the Morning Bender’s pleasant and newly revamped sound.

The Morning Benders’ first album, Talking Through Tin Cans (2008), was a post-“The Shins Will Change Your Life” affair, not that that’s a particularly damning association (see both Someone Still Loves You Boris Yeltsin albums for examples of the trope done to near perfection.) And while their debut was a decent record, it didn’t do much to make them stand out from every other band specializing in slightly precious, sunshiny indie pop. Big Echo, though, announces itself from the start as something decidedly else. The debut’s hooks and bright sensibility haven’t gone anywhere, but the aesthetic of Big Echo is much more intriguing: sweeping and misty, like a cloud mercifully diffusing a too-bright sun. Big Echo is the chronicle of a band making a conscious effort to rewrite their signature sound—and it’s an admirable effort even though the transformation falls short of being completely successful.

Unlike their debut, Big Echo was produced by Grizzly Bear’s Chris Taylor, which is a mixed blessing. On one hand, Taylor’s teased out a wide range of textures. The band’s never sounded better: the guitars on songs like “All Day Day Light” and “Promises” pack a crisp punch, while more languid tracks (“Sleepin In”) showcase the sort of airy, gracious space Taylor’s conjured so well in his band’s own records. But here’s the other hand: Taylor’s presence also makes the Grizzly Bear comparisons just too obvious, both for the band’s listenership and for critics like me looking for easy words. What damns them is how they frequently grasp at Grizzly Bear’s familiar brand of prettiness, rarely capturing the effortlessness that would keep a better record afloat.

So here’s a comparison only slightly less lazy: Big Echo reminds me most of the Department of Eagles’ In Ear Park (2008). The opening of “Promises” bops a lot like “No One Does It Like You,” but it lacks the latter’s carefree buoyancy and ends up feeling a little too stiff to achieve the breeziness it’s obviously going for. Big Echo often comes off as more concerned with suggesting—through occasionally inspired “oohs” and “ahhs”-vague ideas about prettiness than offering up any moments actually, viscerally, immediately pretty. I think this has to do with the fact that they sometimes seem torn between their past and present rather than having found a way to unite the two; songs like “Stitches” and “Cold War (Nice Clean Fight)” are still tethered to their Shins-influenced songwriting, and their inclusion doesn’t compliment the slower, more plodding songs so much as disrupt what could have been a seamless, even mature, thought. Don’t get me wrong, there are moments that really work—aside from “Excuses,” the band achieves a sublime ease on the aptly titled “Pleasure Sighs”—but even when they’re on, the Morning Benders have apparently just moved from one crowded indie subgenre to another, still not quite able to find a voice worth remembering.