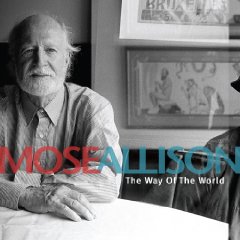 The Way of the World

Listening to Mose Allison—his concise piano-based parables; his even voice and literate verses—often carries the same affect as making it through a winding Steve Reich composition: the tiniest variations in melody and theme become hypnotic, building into giant proportions. And while Allison’s every song has some kind of solo or punchline, a joke or story left unresolved or with a twist, the feeling of taking Allison’s music in larger swaths becomes an elemental experience—and listening to just one Allison album is probably the worst way to approach the 82 yr-old jazz pianist’s career.

That said, The Way Of The World is basically interchangeable with Allison’s 1957 debut, Back Country Suite, other than the obvious addition of a lower voice and more concrete opinions. Each new aspect or addition to Allison’s small-scale ensemble ditties, from the early-Dr. John percussion rattling “Let It Come Down” to the steel guitar in “Some Right, Some Wrong,” feels less like an upgrade than one more tiny bit of debris in a steep current of a prolific, long-developing sound. That this is his first recording in twelve years doesn’t seem to matter so much as that The Way of the World can fit efficiently and seamlessly on the tail-end of a 30-something album canon.

“If you can’t sympathize with me, please let me be,” he demands on “Ask Me Nice,” and it’s as if he’s admitting his insular tendencies blankly, nodding to maybe the central reason he’s never really stepped into the figurehead role that similar and similarly acclaimed jazz and blues survivors usually get shunted into. High profile covers and references aside (The Who, the Pixies, Elvis Costello), Allison doesn’t really fit safely into a grander narrative or lineage. He’s more or less self-contained; his Loudon Wainwright cover (“I’m Alright”) functions more like Gil Scott-Heron’s Bill Callahan nod than an acknowledgement of influence, assimilating attitude and outlook without drawing firm lines.

The looseness implied by his deepening rasp and less obliquely witty lyrics is maybe the most interesting facet introduced to Allison’s music by The Way of the World. Like a dissonant note, there’s something codger-ly about the defensiveness of “Ask Me Nice” or the kids-these-days “Modest Proposal,” both heavy with hints of Allison playfully scolding Randy Newman. Part of the appeal of Allison’s catalog has always been that it seemed to exist solely of itself, bare, sincere, without affectation—“How much truth can a man stand?” he asks on 1971’s Western Man, letting the question hover and expand. And in the end—if that’s where we’ve come with this new album—even his more specific concerns are dismissed as “just the way of the world,” an appropriately simple way to jettison the worries of old age.

Really, The Way of the World is just one more Mose Allison album: exceptional in it’s own right but entirely expected. “My brain is losin’ power / 1,200 neurons every hour”—these sorts of succinct, unbothered moments make Allison an accessible, addictive songwriter. So, while there isn’t quite the ethereal consistency of his first albums here at hand, the return of Mose Allison is a welcome reminder that he probably never went much of anywhere at all.