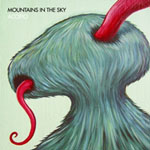 Mountains in the Sky

An old man hums for two bars until a looped-backwards chorus of children sing, accented by plucked harp, and followed by a giant, majestic horn that was probably lifted from some album about some time when Julius Cesar or at least Frank Sinatra came into some place and did something awesome. Descending, vaguely jazzy chords are introduced while the chorus of kids becomes more pronounced and the horn continues to sound. You get the feeling that a wondrous “Event” is taking place, and you’re privileged to be amongst the few who get to enjoy it. A gorgeous drum break sneaks up on the arrangement, and, suspiciously, the elements eventually disappear one by one, leaving looped atmospherics in their wake. We discover that they were all scared off: a neurotic bassline crept in when no one was looking, and now poison darts of synth are raining down on the drums. This can’t be good. The synth’s angry mama bird, a wailing metal guitar riff, swoops over the scene, panics the crowd, and persists to terrorize the party for about 16 bars until it gets bored, flies away, and, eerily, leaves only a loop from Hall of the Mountain King. We get a minute to look around, and realise that the Deadly Guitar Owl kidnapped Miles, the Prince. There’s a heap of strings scurrying about, looking everywhere, but they’re cowardly, and quickly disappear when the break and poison synths return, presaging more predatory guitar licks. As can be expected when so many people are packed together in a public place, there’s a resulting shitstorm of freaking-out attendees. The beasts eventually fade away, flapping back over the horizon, and peace returns by way of plodding bongo break. Overly-fey Holly Throsby skips into the Coliseum, sprinkling the ground with rose petals, and proceeds to serve schnapps and marshmallows to calm the crowd. Don’t worry, kids, we’re all safe now, and we have an adorably fragile folk singer playing, just to prove it. Throsby mmmmmmms and dadado’s for a while, blowing bubble gum bubbles that float out onto other peoples’ noses and pop and release turquoise dragonflies into the air. However, the gears on Holly’s mechanized parade float abruptly grind to a halt, and she tumbles over the side. The newly-relaxed crowd chuckles at the humorous turn of events, but off in the distance, over the Mountains, the deadly Queen Owl Guitar Lick has finished picking the Prince’s bones dry. He was a vegetarian, and he didn’t consult a dietician or independently research how to get enough iron, so he was scrawny, and not a good meal. The unsatisfied Deadly Guitar Owl Queen echoes a cry out across the plains for more royal blood. Throsby’s lace frills are stuck under the tire of the Float, but no one notices. The coliseum becomes deathly silent, all you can hear is a funereal organ, and the faint buzz of lightning jumping from cloud to cloud. A ghost appears in the middle of the coliseum -- it’s the Prince -- and he starts using his powers of levitation to pick out all the people in the audience -- the dignitaries, ambassadors, their families, harems, servants -- anyone associated with anyone who never heeded his warnings when he was alive: “Start a community compost, or else some scavenger Mountain owl will get in the habit of eating our genetically-modified fried chicken leftovers, and turn into a giant mutant chimera birdie and terrorize the village.” Drums run back and forth over the crowd as its more-ignorant contingents are picked up by the sheer will of the ecologically-conscientious Ghost Prince. He slams them all against the walls, their bones crushing, creating rollicking percussion fills. The Prince emits a strange electric buzzing sound, reverberating through the clouds overhead. The ground quakes with a manic bassline, the lightning clouds swirl, buzzing ever louder, and small tornados pick up dust from the arena floor, adding to clang and crack of the armoured human Hindenburgs crashing to the ground in rapid succession. The Prince starts to laugh as the plumper heads of state make bulbous conga-like pangs when they bounce. People scream, they cover their ears as the buzzing bass hums become more intense and the cracking bones become too much to bear: they chant “sorry, sorry” in their native language, but it’s not until he hears the Owl’s distant cries that the Prince puts an end to his carnage, obedient. The magnetic forces of the lightning clouds cause Holly’s float to shake, its bolts creak as they become loose. Cesar Sinatra knows that it’s now or never; he can’t risk the mutiny that would result if the Owl attacked again. He thinks quickly, balancing the options, and purposefully walks into the centre of the arena, and signs, right in front of his son, the Prince’s eyes, the Toyoko Accord for the proper disposal of rubbish chicken parts. The clouds immediately dissolve in thin air, the miniature tornados turn into warm breezes and disperse, tickling the necks of the surviving attendees. The old man picks up an accordion and begins to play, quietly, and, inexplicably, a calm moves through the crowd. The descending, jazzy chords return, and the Prince disappears into thin air, with a ratpackish smirk on his face, like the Cheshire Cat. He is never seen again, but, every so often, whenever someone litters, the call of the hungry Owl Queen sounds from over the Mountain, as a reminder of these events.

I asked John Lee if he could describe his brand of electronica. He thought about it for a minute and said “psych rock.” I felt comfy knowing that, somewhere, Mike Patton was busy making fun of Wolfmother.