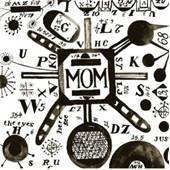 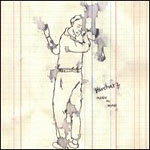 If Ipecac’s goal is to build a coterie of genre-modifications with “heavy-“ prefixes, they’ve been doing fairly well, and this new Mouse on Mars album, which often sounds like cut-up reconstitutions of Fantomas or the Melvins, is a fun addition to the mix. It’s not like we haven’t heard Mouse on Mars be heavy before (two hearts and a big BFF to Idiology [2001]), but this is the first album where they’re trying to meld experimental thrash and metal with their already messily brilliant takes on dance music in a way that, aesthetically at least, sort of conforms to metal ideas. Which is a complicated way of saying that a lot of these samples either are or sound like heavily distorted guitars. And when they successfully combine all of those ideas, it sounds amazing.

Witness the way distorted filters are squeezed through sieves at the outset of “charTnok,” a blustery portrait of cycling frequencies and factory-floor drums. Phased chords give way to drill-bit punctuation and the growling melody that solders all these bits together. The track is the perfect example of why the genius is always in the moments for Mouse on Mars, but it also shows that the details come second to a well-developed execution and composition that solves this heavy/bouncy equation and somehow skyrockets all kinds of shrapnel into club heaven. Attacking from the other direction, “Fish Bord” gloats over a thudding bass line with vocal samples, snares, and hats. The keyboards that blossom over top (well, blossom as much as rust can) intersect one another like x-rays, tricks of light that define actual solid matter’s outlines. The phased rolls that bubble beneath the main riff are enchanting, as is the tent of hats and snaps and gibbles they construct over top.

Completing this brilliant opening trio is “Düül,” both unabashedly experimental electronica and, at least in parts, a wicked dance track. Those drums that undercut the distorted guitars at the beginning are genius, all collapsing percussion and grimy accents. The song breaks for an updated Emerson, Lake and Palmer tangent—then gets fiercely back on track. The guitar is actually quite proggy all throughout, but it’s the end where the genre quotes falls together with everything else: the basic riff is accented by feedback squalls, synths, and wild punk drumming percussion. “Düül” screams to be remixed into my favorite dance track ever; right now I’ll just take it as an excellent composition.

And then, well, the album becomes more experimental. The first part of “Inocular” is based upon a really interesting percussion sequence, but the nauseating ring modulations in the background and the general sparseness of the track make it seem a bit vacant, and the second part (there’s no break in the sound) seems to go too far in the other direction, becoming a pretty boring nu-metal coda to a Zeppelin cover or something. It’s all major chords and fuzzed-out guitar solos, like…uh…Billy Corgan. “Skik” is a nice experiment with a beep map, but the textures and melodies are a little too Commodore 64 for my tastes. If I wanted to hear bad 8-bit retro noise I’d play Zac McKracken and the Alien Mindbenders. And it’s just way too long. “Hi Fienilin” starts with descending-to-the-dungeon atmosphere before exploding in a huff of gritty synths and pitch-bended static waves. But, beyond the initial motif, the rest of the manipulation here just doesn’t hold weight. Mouse on Mars throw flange all over the place in an attempt to spice things up, but it’s just needless effect wizardry.

“BerTney,” therefore, becomes this awesome oasis right before the album goes off the deep end with the “ReTphase” series. Funky, chill, and well grounded, the track takes two clean waves and allows them to undulate in and out of harmony overtop a delicious clavinet line. It’s not quite a barnstormer, but you could get people warmed up to it. “ReTphase” destroys the momentum, though; it’s an extended work somewhere between free improvisation and experimental electronica that seems to have no direction or purpose. When you throw this many noises into the chaos it gets distracting, because it just sounds like banging on the keys of your modules and samplers and making music by accident. Especially since “One Day, Not Today” is actually a pretty little free jazz tune, just as chaotic, but without all the random triggering.

Which means the album is a dualistic affair. None of the really experimental stuff is so egregious to mar the album; it’s just fairly disposable after one keen listen. On the other hand, the good, funky stuff isn’t quite as good or funky as it has been in the past. But, then again, maybe Mars just isn’t as far away as it used to be.